This morning's pair of U.S. economic releases were positive for stocks.

The U.S. Department of Commerce reported that housing starts jumped 3.6% from last month -- far better than the 4.4% drop to 825,000 that analysts had expected. The jump means housing starts are now at their highest level in four years. 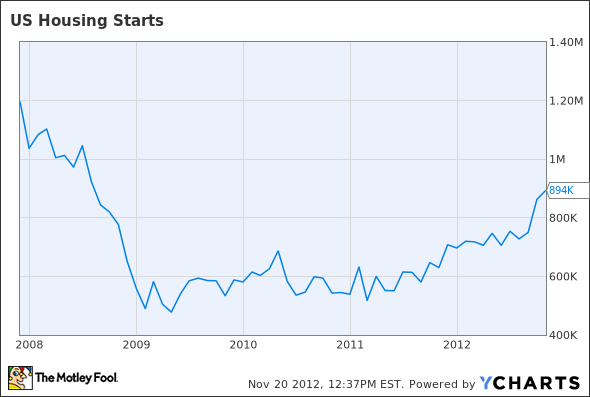 Building permits, an indicator of future housing starts, fell 2.5% month over month. However, the annualized figure of 866,000 building permits in October was still 30% higher than the 667,000 recorded at this point last year. 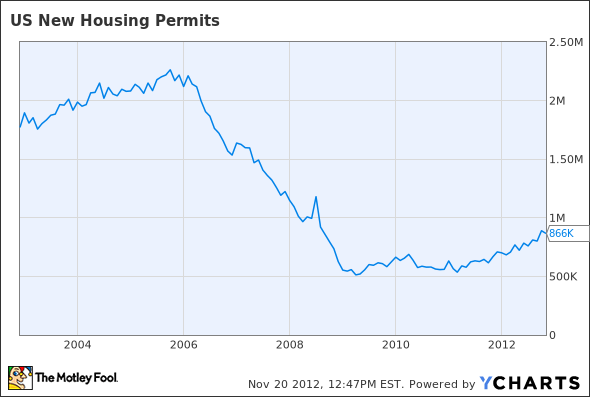 Both these numbers point to continued and future strength in the U.S. housing and construction markets, which bodes well for the U.S. economy as a whole.

The Dow has reversed its late-morning rally, but a few stocks are trying to lead the index higher.

Today's Dow leaders
For the second day in a row, the Dow leader is Bank of America (NYSE:BAC) up 0.95% to $9.62. Close behind, once again, is JPMorgan Chase (NYSE:JPM) up 0.27% to $40.70. The big banks' financial results are highly dependent on the health of the economy, so these stocks are up thanks to today's unexpectedly positive housing numbers.

Bank of America has been making some big moves recently, including finishing its mortgage settlement obligations two years earlier than expected. Fool analyst John Maxfield thinks it's time to buy Bank of America. At the same time, Fool analysts Anand Chokkavelu and Austin Smith recently looked at what they consider to be the biggest threat to Bank of America.

McDonald's (NYSE:MCD) up 0.55% to $85.51. After a monster 2011 which saw the stock rise 30%, McDonald's is this year's third-worst Dow stock, down 15% year to date. The fast-food leader has been hurt by weakness in Europe, food price inflation, and tougher competition. All these combined for a weak Q3 earnings report and a 1.8% same-store sales decline in October. Our analysts have really dug into McDonald's in these tough times for the blue-chip behemoth. To read their premium research report on the company, which comes with 12 months of free updates, click here now.