This morning's four U.S. economic releases were positive for stocks.

This morning the U.S. Department of Labor reported that weekly unemployment claims fell by 41,000 to 410,000 on a seasonally adjusted basis. The level of claims was lower than the 418,000 analysts had expected. New claims had been fairly steady at around 380,000 but jumped last week. 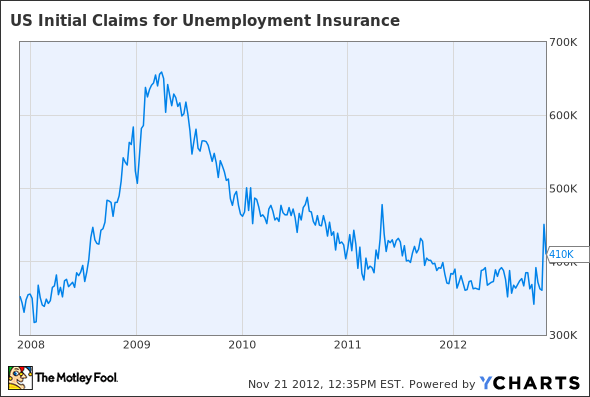 The Markit PMI was up 1.4 points in November to 52.4, better than analyst expectations of 50.8. Numbers greater than 50 indicate expansion, while numbers below 50 signal contraction. The third economic release was the Conference Board's Leading Economic Index, which was up 0.2%, beating analysts' expectations of 0.1% growth. The index is made up of 10 indicators and is designed to signal peaks and troughs in the business cycle. The final economic release was the University of Michigan Consumer Sentiment Index, which rose 0.1 points to 82.7, up 30% year over year and now at a nearly five-year high.

All four of these numbers point to a growing U.S. economy, and as such, the Dow is rising, with a few stocks leading the way.

Today's Dow leaders
Today's Dow leader is Hewlett-Packard (NYSE:HPQ), up 2.5% to $12.01. The stock is "dead cat bouncing" after yesterday's 12% drop. The stock tanked yesterday as the company announced it would take an $8.8 billion writedown, with $5 billion of it attributable to Autonomy, which the company purchased last year for $10 billion. At the time, many analysts thought the purchase of Autonomy was a dumb decision, and they have since been proven right. It's hard to believe, but this is the second $8 billion writedown the company has taken this year. The first was the $8 billion writedown of HP's 2008 acquisition of Electronic Data Systems. At least in the case of Autonomy, HP is accusing the selling executives of fraud. It will be interesting to see how this plays out, but one thing is clear: HP is a terrible acquirer and needs to stop burning through shareholders' cash.

Second for the day is Cisco (NASDAQ:CSCO) up about 1% to $18.52. There's no news pushing Cisco higher besides a generally rising market. Cisco reported earnings last Tuesday, beating analyst expectations on earnings per share and meeting expectations on revenue. Over the weekend the company announced it would acquire Meraki, a cloud-computing firm, for $1.2 billion.

Our analysts have really dug into Cisco. To read their premium research report on the company, which comes with 12 months of free updates, click here now.