Are you one of the potential 147 million shoppers set to hit the stores this Black Friday weekend? Will you shop and buy like the rest of America? Let's take a look at previous Black Friday shopping habits -- with the help of the National Retail Federation -- to get a little insight into what Americans might do this year.

Who's going shopping
But if history repeats itself, an estimated 147 million shoppers will hit the aisles this Thanksgiving weekend, shelling out an average of $400 apiece. Nearly half of shoppers slated to venture out this holiday break will stay home if they're not enticed by the numerous store ads circulating the media. And with nearly $60 billion in sales up for grabs, advertisements from struggling retailers like Best Buy (NYSE:BBY), RadioShack (NYSE: RSH), J.C. Penney (OTC:JCPN.Q), and Sears Holding Corp. (NASDAQ:SHLDQ)  will be some of the most important they run all year.  Advertisements aside, what time will Americans be waking up this year for Black Friday, or for that matter not going to sleep, to snatch up those lucrative deals? If patterns hold the same from this year to last, you'll need more than a single serving out of your Green Mountain Coffee Keurig machine or Starbucks Verismo to keep up with Americans this year. If shoppers' habits are similar to 2011, 39% of you will be sleeping in while 61% of shoppers will be out the door before 9 a.m. this year. 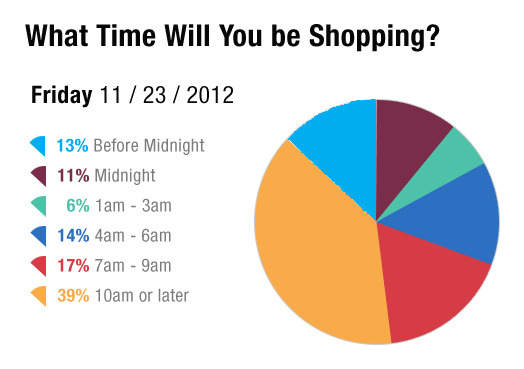 Many retailers will open the doors even earlier this year than ever, Wal-Mart (NYSE:WMT) and Target (NYSE:TGT) will open at 8 p.m. and 9 p.m., respectively, on Thanksgiving Day. But who will you be surrounded by during your shopping extravaganza? Surely not grandma and grandpa; in 2011, the majority of BF shoppers were 18 to 34 years old, and about half of shoppers 35 years old and over stayed home. All right, now that you know who you'll be surrounded by and when you'll be shopping, how will you be shopping?

How you'll be shopping
You're probably not going to peruse my personal childhood favorite, the Sears Wishbook, to do your shopping this year. Especially since the print edition has since been discontinued in favor of an online edition.

Catalog shopping has been trending down since 2004 when it accounted for 21% of holiday purchases to 14% in 2011. Companies are embracing electronic forms of shopping, with 80% of retailers set to use Facebook (NASDAQ:FB) alerts for shopping sales.This is great news for Facebook shareholders, and hopefully Facebook will figure out a way to monetize the traffic from the notifications.

Companies are also increasingly using mobile notifications to alert shoppers of sales; 29% of retailers now use notifications compared to 18% in 2011. It looks like electronic communication will play a big role in bricks-and-mortar retail sales this year, but what about that fancy thing called the Internet? Seven out of every 20 shoppers this holiday break will be doing some form of shopping on the World Wide Web.

Cyber Monday is just around the corner, too. In 2011, 52% of holiday shoppers used Internet retailers like Amazon.com (NASDAQ:AMZN) to do their shopping. This is a huge increase from the 27% of shoppers using the Internet in 2005. This year, Amazon has promoted different deals each hour since Nov. 19 leading up to the biggest online shipping day of the year: Cyber Monday.

Unfortunately for employers, the majority of Cyber Monday traffic will come while people are on the clock. Historically, only 22% of shoppers surveyed would shop off the clock.

If you're a male, you'll most likely be spending 23% more than women on your gift card purchases this year as well. The majority of gift card sales will go to department stores, with 39% of sales, and restaurants, at 33% of sales. For investors evaluating holiday sales, a boost in gift card sales may result in decreased sales initially, as gift card sales are carried as a liability on the balance sheet until they're redeemed. Investors shouldn't be alarmed, though, the sales from gift cards are recognized as revenue over time as they're redeemed..

Well, there you have it; it's shaping up to be quite the Thanksgiving break for retailers this year. Unfortunately, we'll all have to wait until next week and quarter to see how things pan out for most retailers, but industry reports can give us great insight into any surprises or disappointments lurking in the future. Investors should keep an eye out for sales data released by the NFR on Sunday and Wednesday to see if consumers continue to shift toward online shopping.