The dead men walking of the mobile computing industry have been looking limber lately. Shares of Research In Motion (NYSE:BB) jumped 14% on Friday and have climbed 33% over the past week. Nokia (NYSE:NOK) topped off a 31% five-day climb with an 8% Friday boost.

But both stocks still trade nearly 40% below 52-week highs, even after these drastic gains. Are these the last spasms from a pair of headless chickens, or are the former mobile giants getting a genuine second wind? 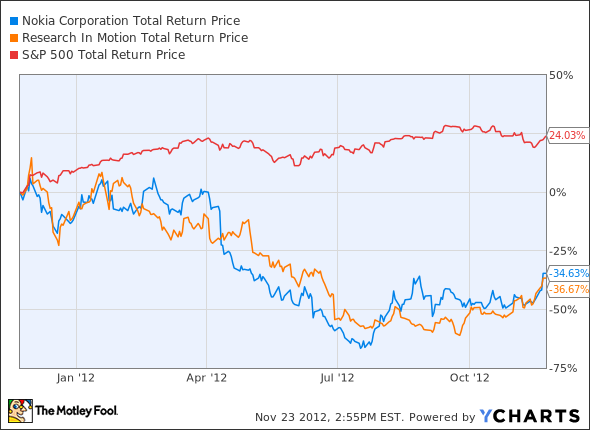 Finlandia, tone poem for orchestra?
Nokia's Friday lift came from a drastic analyst upgrade. Danske Bank Markets' Ilkka Rauvola upped his rating on the Finnish company by two notches, from a "sell" straight up to a "buy."

The Finnish analyst, working for a Danish firm, more than doubled his price target on Nokia to $3.76 per share. He based the upgrade on surprisingly strong sales of Lumia smartphones, which run the Microsoft (NASDAQ:MSFT) Windows Phone 8 operating system. Early sell-outs are probably due to small early shipments, Rauvola said, but European demand for the devices is strong, and Nokia knows how to ramp up manufacturing very quickly when it needs to.

"We believe the share appears attractive in the short term," Rauvola argued, because the stock trades at bargain-basement valuation levels.

The upgrade makes a ton of sense if Nokia's Lumia sales turn out to match Rauvola's projections, but I must say that the analyst's balancing of supply and demand here seems a little bit speculative. Will early interest in these newfangled Windows phones have legs, or is it just the fleeting love of shiny new gadgets? Only time will tell when holiday-quarter sales reports trickle down from the usual suspects, like IDC and Gartner. Until then, Nokia is a poker chip at best.

O Canada!
How about RIM's jump? Well, it's another local analyst firm pouring sugar on the BlackBerry maker. Montreal-based firm National Bank Financial reiterated its "buy" rating on the stock and raised target prices from $12 to $15.

When the BlackBerry 10 platform finally makes its oft-delayed debut in February, the bank expects sales to beat the Street's consensus estimates. NBF analyst Kris Thompson upped his sales projections based on "positive sentiment building in the industry."

If you say so, Kris. The only solid piece of positive news I've seen regarding BlackBerry 10 is that RIM should ship the first phones in February, not March. CEO Thorsten Heins says everybody loves the software, but what else do you expect the recently appointed CEO to say? It's his job to build up hype before the launch, and to make the thing seem bigger and better than it really is. If NBF based its rosy sales projections on Heins' statements, I'm afraid the firm is in for a rude surprise next year. RIM's reality distortion field is nowhere near as strong as the one surrounding Apple (NASDAQ:AAPL).

Two headless chickens
All things considered, these analyst actions might inspire some confidence in Nokia, but the Finns still have to follow up with actual sales. Behind RIM, I see nothing new to hang your bullish hat on. Both stocks remain highly speculative, and their recent gains may very well evaporate when the rubber hits the road.

I'll give Nokia the benefit of the doubt, but I'm renewing my bearish CAPScall on RIM right here. Apple and Google (NASDAQ:GOOGL) are destroying both companies, and I don't see RIM ever pulling out of this tailspin. Nokia stands a chance, albeit a small one, and I think it's risky to bet against the Finnish veteran.