There's still another month left in 2012, so these could prove famous last words. But here goes: 2012 is on track to be one of the mellowest years for stocks in decades. 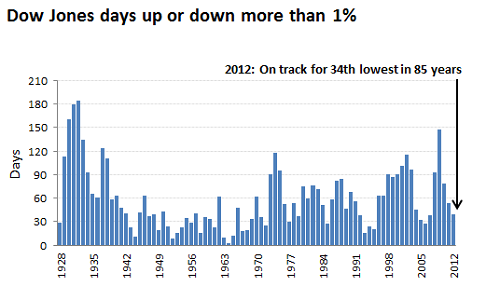 It's more impressive if you shorten the time frame. Since 1980 there's been an average of 65 days when the market moved more than 1%, so 2012 is on track to be about 40% below average. It would also end up as the seventh-quietest year in the last 32 years. In the last decade the average is 75 wild days per year, with 2012 on track to be the third-calmest.

What does this mean for stock returns going forward? As I wrote earlier this year, very little:

Stock research firm Birinyi Associates once calculated S&P 500 (SNPINDEX:^GSPC) returns one, two, three, and six months after the VIX Index (a measure of market volatility) broke 20% below and 20% above its 50-day average. The correlation, it found, was meager. The VIX "details, perhaps better than other measures, the volatility of the market today but not tomorrow or the day after," Birinyi wrote.

The chart above confirms the point over longer periods. Market volatility was high in the early 1930s, and it was one of the best times in history to buy. It was also high in the late 1990s, which was literally one of the worst. Markets were calm in the mid-1960s, and subsequent returns were poor. They were also calm in the early 1990s, and subsequent returns were terrific.

So a calm market today tells us little about where it will go tomorrow. But hey, maybe it helps you sleep better.