He's back at it, folks. Berkshire Hathaway (NYSE:BRK.B) CEO Warren Buffett wrote another -- I think his third -- op-ed in the New York Times on why capital gains taxes can and should be raised on the wealthy. He writes:

SUPPOSE that an investor you admire and trust comes to you with an investment idea. "This is a good one," he says enthusiastically. "I'm in it, and I think you should be, too."

Would your reply possibly be this? "Well, it all depends on what my tax rate will be on the gain you're saying we're going to make. If the taxes are too high, I would rather leave the money in my savings account, earning a quarter of 1 percent." Only in Grover Norquist's imagination does such a response exist.

I'd add: Most savings account currently yield far less than a quarter of 1%.

Buffett's big point is that capital gains taxes have been considerably higher for most of modern history -- nearly double the current rate. "I was managing funds for investors then," he writes. "Never did anyone mention taxes as a reason to forgo an investment opportunity that I offered."

Here's what this looks like over the last 60 years: 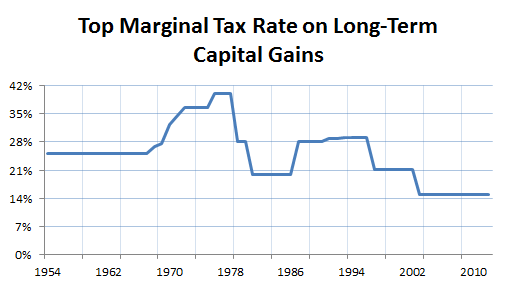 It isn't causation, of course, but I'd point out that the last decade was one of the worst ever for stocks even as capital gains taxes were at historic lows.

Buffett makes a similar point: "Under those burdensome rates [of past decades] both employment and the gross domestic product (a measure of the nation's economic output) increased at a rapid clip." 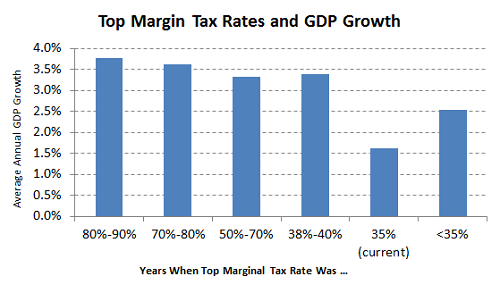 It can't be stressed enough: These charts don't show that low taxes lead to lower growth. That's been the trend over the last 50 years, but it's almost certainly not causation. What they show is that other factors -- population growth, global trade, demographics, technological breakthroughs, tax deductions, and countless other factors -- matter much more. The world where people say "Cut/raise tax rates and growth will rise/fall" just doesn't exist. It's a lot more complicated than that.

Back to Buffett's point about capital gains taxes and people's willingness to invest. As the Tax Policy Center explains: "About half of all corporate dividends are paid to investors that don't pay tax -- pensions, non-profits, foreign entities, and the like. Changes in the dividend tax rate don't affect their tax bills."

That's true for capital gains, too. According to the Investment Company Institute, there was $17.9 trillion in retirement-fund assets last year. 46.1 million Americans hold investments in an IRA. Changing the capital gains tax rate has virtually no direct impact on these investors since withdrawals are typically taxed as income.

For better or worse, taxes are going to be a big issue in the coming weeks as Congress and the president hammer out a deal to avoid the fiscal cliff. My simplistic view is that over the long term, taxes should roughly equal the services people demand from their government. In near unison, those people demand a generous social safety net and a large military, which alone make up 78% of federal government spending. However it's done, be it tax reform that reduces deductions to broaden the base or raising marginal rates themselves, the simple truth is that current tax revenue isn't enough to pay for the services voters by and large refuse to cut.

"In the meantime, maybe you'll run into someone with a terrific investment idea, who won't go forward with it because of the tax he would owe when it succeeds," Buffett writes. "Send him my way. Let me unburden him."