While it was busy navigating holiday obstacles, Wal-Mart managed to notch some key retailing wins. Massive labor strikes and hypercompetitive shoppers were two of the major worries that the company had going into the holiday kickoff. Yet huge employee walk-offs didn't materialize, and dangerous stampedes for Xboxes didn't happen.

It was a good day
But lots of shopping did. The company handled some massive volume this year. At the height of the shopping mayhem, Wal-Mart processed 10 million in-store transactions over just a few hours, at a rate of 5,000 per second. Altogether, the company served 22 million customers on Thanksgiving, in what it called its best ever Black Friday event. Earlier this month Wal-Mart said that November sales were running "ahead of plan," and the kickoff to the holiday shopping season appears to have kept up that positive momentum.

Protests and employee walkouts didn't have nearly the effect on Wal-Mart's big weekend that was feared. Heading into the Black Friday events, estimates had called for thousands of workers to join labor strikes. That could have led to chaos in the stores, particularly while processing volume like that. But the actual numbers of protesting employees was much smaller. The company estimates that fewer than 50 associates joined in the protests. It also said the number of people who missed their holiday shift was comparable with last year's totals.

Price wars
But Wal-Mart wasn't just playing defense this year; it advanced the ball, too. The company zigged as other national retailers zagged on prices. While Target (NYSE:TGT) and Best Buy (NYSE:BBY) agreed to match their prices with online juggernaut Amazon.com (NASDAQ:AMZN), Wal-Mart didn't follow along.

The fact that Wal-Mart stayed out of that game will add crucial support to the company's profit margin, which has held up well against other retailers over the past few years. 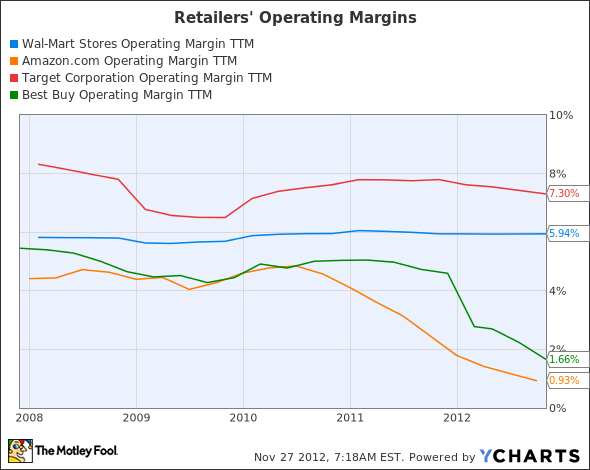 Instead of joining the online price war, Wal-Mart drove store traffic with specials on Thanksgiving night. Those included guaranteed price and availability of a few hit products, including Apple iPads, to anyone who was in the store, no matter if supplies lasted the crush. The company called the turnout for those doorbuster offerings "amazing."

Mobile wars
And before the holiday season even started, Wal-Mart had hitched its cart to an aggressive mobile commerce strategy that's already paying dividends. The company completed GPS geofencing of all of its stores earlier in the year so that they could be ready to take full advantage of mobile technology. And just before the holiday, it updated its shopping app for smartphones and tablets. The new app was a major feature of the Black Friday promotions. And it made use of the stores' new GPS capabilities through interactive maps that showed the exact location of Black Friday deals.

Wal-Mart had plenty of reason to bet on mobile commerce. Mobile sales have been a growing channel for purchases, and the company expects nearly half of its holiday Web traffic to come from smartphones and tablets. More than 10% of its mobile sales already occur while the customer is in the store. Wal-Mart's mobile strategy aims to capitalize on that opportunity to drive traffic to its own website for out-of-stock models or for products that customers would rather have delivered to their home.

And initial data suggests that the company's bet on mobile was a smart one. IBM says mobile shopping was a key theme of this year's Black Friday. Online traffic from mobile devices accounted for a whopping 24% of holiday traffic this year, up from 14% in 2011.

Now what?
Wal-Mart avoided the major traps at the start of the holiday season and built up some positive momentum. But the company can't waste time congratulating itself. There are other risks ahead. Chief among these is deflation, which was a main reason Wal-Mart missed its own comparable-sales guidance last quarter. While lower costs are good for customers, they make sales gains that much harder for the retailer to book. Still, a better-than-expected holiday season can only make things easier.