There are thousands of really smart people whose job is to forecast where the stock market is heading.

I'm not talking about stock-pickers who focus on individual companies, but market strategists who try to predict where the Dow Jones (DJINDICES:^DJI) and S&P 500 (SNPINDEX:^GSPC) are going next.

And despite having more information than has ever been available before, here's the sad truth: We really have no idea what the market is going to do, even over 10-year periods.

The answer is somewhere between a little and nothing: 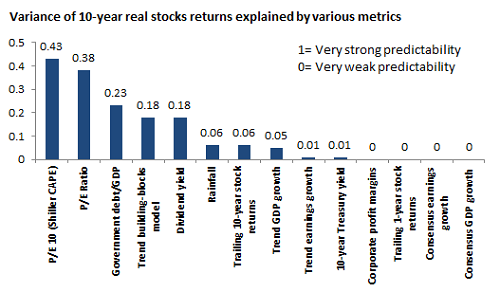 Valuations are the single-best predictor of future returns, but they still only explain a minority of outcomes.

From there, it's dicey. Dividend yields tell you very little about future stock returns -- likely because the amount of earnings companies pay out as dividends fluctuates. GDP growth tells you virtually nothing. The same goes for earnings growth. Profit margins, trailing returns, and forecasts of earnings and GDP growth tell you nothing at all.

You'll notice that rainfall is one of the variables Vanguard included. That's exactly what it sounds like -- wet stuff falling from the sky. Of course, that should be a totally meaningless variable for predicting stock returns. But even that tells you more about future returns than analysts' projections of earnings growth. Rainfall!

Blogger Barry Ritholtz had a smart reaction to Vanguard's paper: "Perhaps a more significant complaint is a peeve of mine about single variable analysis -- that looking at any one metric alone to explain complex systems (such as investment outcomes) is doomed from the start."

In other words, Vanguard's analysis shouldn't be surprising at all. Anytime people try to make investing formulaic -- "I only buy when X variable is at Y" -- in a market that is influenced by billions of different variables, they are shooting in the dark. "Keep it in mind the next time you see someone trotted out on TV to claim that stocks are a great/terrible buy RIGHT NOW because of any single one variable," Ritholtz writes.

Instead, investors should form a mosaic of information that shapes their view of potential investments. Low valuations are a great starting point, but they don't guarantee happy results. What's the political climate? What are demographic trends? Will there be wars, oil shocks, natural disasters, technological breakthroughs, or banking panics? All of those will make some difference -- and, importantly, all are nearly impossible to predict.

The big takeaway for me is this: Most information we have at our disposal is useless to long-term investors, and even the important variables don't tell you the whole story. Investing isn't about certainties. It's about acting when the important variables (good companies and good prices) put the odds in your favor, possessing Zen-like patience, and accepting that, in the end, there's a chance things might not work out as planned. That's tough, but that's life.