Hewlett-Packard's (NYSE:HPQ) $8.8 writedown of its Autonomy buyout has sparked a very public duel with the data management software company's ex-CEO.

In the original announcement, HP said that some $5 billion of the writedown was due to "serious accounting improprieties, disclosure failures and outright misrepresentations at Autonomy Corporation." HP shares plunged on the news, and shareholders are suing the company over the whole ordeal.

It's ugly out there -- and only getting worse.

Mike Lynch, former CEO of Autonomy, posted an open letter in response to HP's accusations of fraud. "I utterly reject all allegations of impropriety," he writes, and then wonders whether "HP's operational and financial mismanagement of Autonomy" wasn't more to blame for disappointing results than these alleged accounting deceptions.

Lynch wants HP to explain its nebulous accusations so he can dispute them. But it won't be that easy.

In a statement, HP points Lynch toward accounting fraud investigations in the U.S. and U.K, and reiterates that there's "extensive evidence" of financial shenanigans. And the company gets in a zinger of its own: "While Dr. Lynch is eager for a debate, we believe the legal process is the correct method in which to bring out the facts and take action on behalf of our shareholders. In that setting, we look forward to hearing Dr. Lynch and other former Autonomy employees answer questions under penalty of perjury."

In other words, we'll listen to you when you're bound by oath to tell the truth. There's no love or respect lost between these duelists.

I'm not privy to Autonomy's accounting practices, and ill equipped to take a side in this battle. But I must say that the Autonomy buy made sense to me when former HP CEO Leo Apotheker signed it. The revolving-door policy in HP's executive suite hasn't helped the British software arm live up to $10 billion of expectations. For a while, HP had a shot at emulating IBM (NYSE:IBM) or Oracle (NYSE:ORCL) with a software-based overall strategy, but the board would have none of it. Now, Meg Whitman is charging at far too many windmills at once. 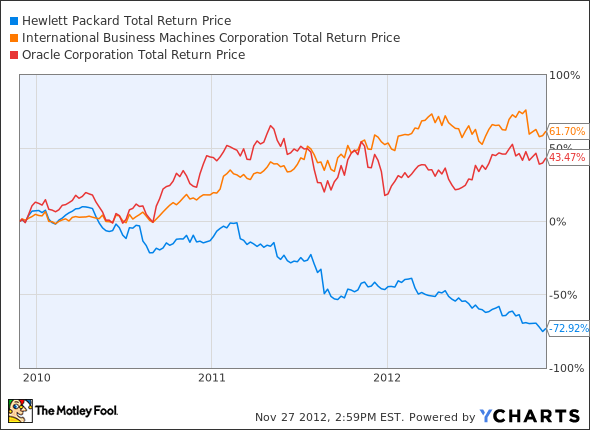 I'm pretty sure that HP shareholders would have preferred a different direction in recent years. The Autonomy debacle feels like a weak cover-up of the company's own problems.