This is the last in a series of commentaries on Dow Jones Industrial Average (DJINDICES:^DJI) component stocks in each S&P 500 sector. We reviewed the Dow stocks in each sector in order of their year-to-date returns, and their ranks are still shifting. The first chart below ranks each Dow sector by total return year to date, including dividend yields.

Our final sector under review, Information Technology, is by far the worst-performing sector this year. It is comprised of Cisco Systems (NASDAQ:CSCO), Hewlett-Packard (NYSE:HPQ), Intel (NASDAQ:INTC), International Business Machines (NYSE:IBM), and Microsoft (NASDAQ:MSFT). The second chart shows how they have done so far this year.

In the past, my research has incorporated a Motley Fool Earnings Quality Score, which taps into a database that ranks individual stocks. The database designates a weekly rating between "A" and "F" based on price, cash flow, revenue, and relative strength, among other things. Stocks with poor earnings quality tend to underperform, so we look for trends that might predict future outcomes.

Cisco
Cisco is an Internet protocol networking business that has produced quarterly gross and net profit margins averaging 62% and 17%, respectively, over the last two years. The cash-flow-from-operations margin has averaged 25% over the last 12 months.

Cisco's revenue has been growing slowly despite global recessions and economic stagnation since 2009. Cisco's costs, however, are slowly outpacing revenue year over year. Quarterly earnings per share are generally higher year over year, but cash EPS (net income minus accruals) should be higher than EPS, otherwise profits and earnings are coming from accruals only. Also, receivables as a percentage of revenue are a bit high. When companies restart their capital spending, Cisco's performance should improve. Hold.

Revenue has been declining year over year, and quarterly earnings fell off the cliff six months ago. In contrast to Cisco, quarterly cash EPS are higher than EPS for seven of the last eight quarters -- a sign of good earnings quality. Operating cash flow is decent and improving. HP's problems are larger than accounting issues or shareholder lawsuits: HP's business model is frankly out of touch with the new mobile-computing paradigm and a new generation of software platforms that are being embraced by, well, the new generation. Sell.

Intel
Intel missed its numbers last quarter, citing a growing demand for mobile handsets and tablets that don't use its chips combined with caution from retailers to stock up with computers carrying Microsoft's new Windows 8 operating system ahead of the holidays. Intel's purchase of 1,700 patents from InterDigital in June for $375 million indicates its intention to move into mobile, as the patents cover 3G, LTE, and 802.11 technologies.

Intel's inventory metrics reinforce the company's message. Days sales in inventory jumped from 69 days to 98 days year over year. Inventory value increased 34%, and as a percentage of revenue it increased from 28% to 40%. Revenue growth has slowed over the last four quarters and was lower than a year ago by 5%. On the bright side, the trailing-12-month cash-flow-from-operations margin has averaged 37%. Buy for the long term.

Microsoft
Microsoft just launched its new Windows 8 operating system for both PCs and mobile devices and also started selling the Surface Windows RT tablet to compete with Apple's iPad and tablets using Google's Android OS. Samsung estimates it will ship 19 million PCs and mobile devices with the new Windows OS this year. Analysts have been slow to praise the new OS, however, and some have even panned it as "clunky and unintuitive."

For the present, however, Windows and the MS Office suite continue to be the dominant software products for PCs. Despite flat revenue year over year, Microsoft still enjoys gross and OCF margins averaging 76% and 40%, respectively. Microsoft's recent moves may be too late to stave off the paradigm shift everyone sees happening. Hold.

IBM
The company that sold computers running Microsoft's "MS-DOS" disk operating system in the early 1980s has since morphed into a pre-eminent technology products and services provider, known the world over as "Big Blue." 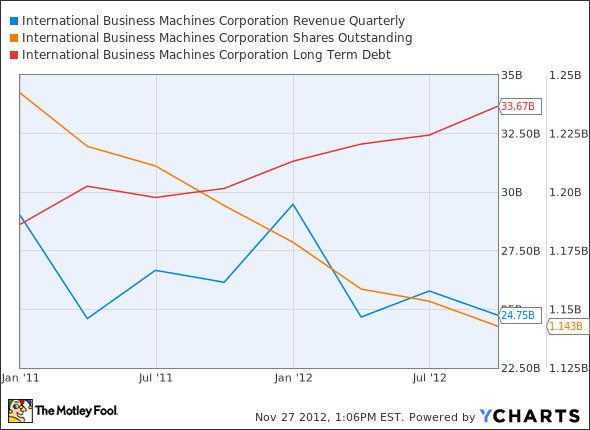 IBM has added considerable debt while aggressively repurchasing shares, despite having an average 19% operating-cash-flow margin. This artificially boosts EPS. Revenue has been trending lower. IBM's history of reinventing itself promotes optimism, and the last stock split (two-to-one) occurred in 1999 at around $125. Hold.

Foolish bottom line
Only time will tell if these Dow IT leaders are on the verge of extinction, and time is the enemy of every technology company. Foolish readers should base investment decisions on earnings quality.