When Nintendo (OTC:NTDOY) released the original Wii console, the stock was primed for insane gains. Share prices jumped 150% in the next 52 weeks, leaving some of that era's most rambunctious growth stocks in the dust.

That was six years ago. Nintendo has rolled out its replacement for the aging Wii system, about a year ahead of expected release dates for the next generation of Microsoft (NASDAQ:MSFT) and Sony (NYSE:SONY) consoles. Did Mario capture lightning in a bottle again, or was the Wii a unique catalyst, never to be repeated?

Where's Pikachu when you need him?
The Wii U debuted just before Black Friday, so the first week of sales should be a decent barometer for consumer interest in the new system.

In the first week on store shelves, Nintendo shifted "more than 400,000 Wii U units." That's below the 600,000 units sold in the original Wii's launch week. Then again, it seems like a calculated move by Nintendo -- the Wii U sold out in retail stores across the country. Best Buy (NYSE: BBY) claims to have sold out of its online inventory of both basic and deluxe systems, though Amazon.com (NASDAQ: AMZN) says it has a few hundred units available.

If you'l recall, the first Wii was perpetually sold out for months. In March 2007 -- four months after the system's official debut -- I had to snag a used Wii at my local GameStop (NYSE: GME) store, seconds after watching employees put it on the shelf. At the time, I was monitoring Wii inventories in local and online stores and waiting for a lucky break.

And it really was a lucky break. In December of 2007, a full year after the original release, fellow Fool Rick Munarriz still had to advise our readers how to snag a Wii before Christmas.

Buying game systems (or anything else!) this way is inconvenient, but chronic shortages also help build mystique around the brand. Apple (NASDAQ: AAPL) is a master of this strategy, and I'm pretty sure that the current short supplies of iPad Mini and iPhone 5 units are at least partly intentional.

One side effect of this supply-and-demand balancing act is that initial sales might not actually matter all that much. Nintendo could probably have sold out a far larger first-week stash, but at the cost of sacrificing that crucial je ne sais quoi that keeps potential customers converting into real buyers.

Can Nintendo stretch out another long tail?
And that's the real magic of Nintendo's business model. The first Wii has long legs -- Nintendo sold more than 300,00 of the 6-year-old console last week. On the handheld side, the antediluvian DS outsold the far fresher 3DS. The hefty sales of old hardware surely ride on deep Black Friday discounts, but they also prove just how long Nintendo expects each new product to generate sales.

It's a gamble, but potentially a great one. The video game industry is extremely cyclical to begin with, and casual gaming on smartphones and tablets has come along to depress incumbents like Nintendo even further in this particular downswing. 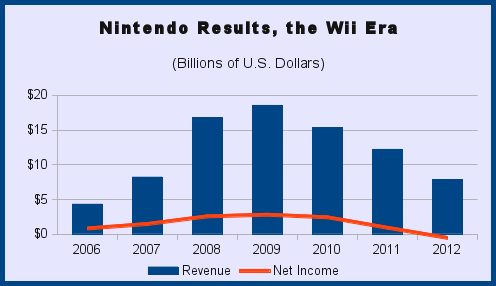 Nintendo's profits in this cycle maxed out in 2009, when the Wii had outgrown the supply-constrained toddler years and built a robust game library. The company hopes to do it all again with the Wii U, meaning that the next financial peak should crest in 2015 or so.

Is the Wii U different enough to make it happen, or does the next half-decade belong to Microsoft's Kinect-style revolution? For the record, Microsoft sold 750,000 Xbox 360 consoles in America last week, probably edging out Nintendo's combined Wii and Wii U sales.