These days, it isn't hard to be bearish on Spanish stocks, particularly in the financial sector. The country's economic woes are well-known; there's little reason to rehash that sob story here. It's too bad for Banco Santander (NYSE:SAN), since the bank is run by smart managers and generally knows what it's doing. It's the clever underdog you root for to succeed, but given the enduring, awful conditions of its home market, its stock isn't looking like a thumbs-up at the moment. Here's a trio of reasons why.

1. The Spanish (economic) flu
For companies unlucky enough to operate in the country, it's all about survival these days. No one's going to thrive in an atmosphere where unemployment is over 25% and rising, the cost of borrowing remains prohibitive (despite some recent easing), and the housing market has ground to a standstill. Who or what is a bank going to lend to? 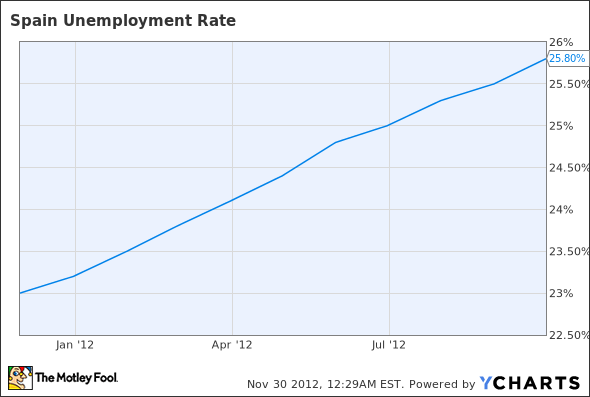 And there's that pesky real estate problem. In order to -- hopefully -- make sure its big financial operators don't collapse under the dead weight of all that empty property, earlier this year, the government mandated a steep increase in provisioning against such losses for its banks. This cost every Spanish bank; Santander set aside 1.1 billion euros ($1.4 billion) last quarter.

Which is the main reason why its 3Q net profit came in so low, at 100 million euros ($130 million) while it was around 1.7 billion euros ($2.2 billion). To its credit, Santander swallowed most of the bitter medicine of the real estate provisioning, but it's not yet done taking the cure. It's still got roughly 500 million euros ($648 million) to go before it hits this year's required amount. This probably won't zap results as badly as in 3Q, but the hit will be big nonetheless.

2. International diversification
Santander bulls hype this as one of the bank's strengths, and to some extent, they have a point. The company is widely spread around the globe and has lately taken in roughly half of its revenue from Latin America.

The problem is, international's not growing much. Over half of that half comes from Brazil, a country where the bank's ratio of non-performing loans have crept up steadily of late, from 5.5% in September 2010 to 6.8% this past September. By contrast, they've dropped slightly in the rest of Latin America, from 3.1% to 3.5% over the same time frame.

In 3Q, those crucial Brazil revenues fell after at least five quarters of steady if not stunning growth, to $5.2 billion. Granted, that's a 14% year-over-year improvement, but the bank needs those quarterly numbers to keep moving north, not the other direction. All told, net attributable profit in the bank's "big three" Latin markets (Brazil, Mexico, and Chile) crawled up only 1% on an annual basis for the company in the quarter.

3. There are more attractive banks out there
Santander's stock has had a bit of a mini-rally lately, with its ADRs rising from a low of recent low under $7 to the current $7.62. Spain's government has made the right noises regarding a bailout that once seemed inevitable but might be scaled back or even rendered unnecessary -- the country has had some notable success floating bond issues lately.

But still. That moribund housing market isn't going anywhere, and although money's becoming cheaper to borrow, it's still too rich for the blood of many Spaniards.

So if there's upside in a stock like Santander, it's probably limited. Contrast that with a well-performing bank on our shores like Wells Fargo (NYSE:WFC), which has powered ahead in a clearly improved housing market and is collecting a virtual windfall in net interest income. Most of Santander's numbers aren't competitive with those of Wells.

Or other big financials. Here's a look at the Spanish bank versus two Americanos, Wells and Bank of America (NYSE:BAC), plus domestic competitor BBVA (NYSE:BBVA) and a big global player, HSBC (NYSE:HSBC).

Santander doesn't leap ahead on any metric, and is dead last behind even clunky Bank of America in P/E terms. OK, OK, those big real estate provisions have an impact on earnings, but even the price/book doesn't indicate any special bargain. The bank just doesn't look worth the risk at the moment.

Good management, bad conditions
That aside, Santander has a decent management team that makes the right moves at the right times -- e.g., getting the bulk of the real estate provisioning out of the way last quarter. But good brains in the executive suite can't do much about bad macro conditions at home. And they don't seem to be fully utilizing that cleverness in relation to assets overseas.

Santander certainly has its strengths, but its markets both domestic and abroad aren't bringing it. I've been cautiously optimistic on the bank in the recent past; however, that domestic crisis really has claws, and it looks like it'll drag on for a quite a while. So as far as this Fool is concerned, Santander's not a buy right now.