Hewlett-Packard (NYSE:HPQ) placed a huge bet on data management specialist Autonomy. The $10 billion purchase price was at stake, not to mention then-CEO Leo Apotheker's vision -- and his own future with the company. Everybody knows that HP suffered dearly when Autonomy didn't deliver on its transformative promise, but nobody has explained exactly what went wrong.

In a piece of serious investigative journalism, Reuters pulls back the curtains on how that tragic deal went down. As it turns out, I was right about Apotheker, Autonomy, and HP all along.

What happened?
According to the Reuters report, Autonomy was far from Apotheker's first choice of buyout options. He came into HP with decades of software expertise and a clear plan to transform his new company into a software and services powerhouse -- in the big, blue mold of IBM (NYSE:IBM). To get the ball rolling, he touched base with software experts Comverse Technology and Amdocs (NASDAQ:DOX), nearly sealed a deal with instant data analysis guru TIBCO Software (NASDAQ:TIBX.DL), but was ultimately sent home empty-handed from every negotiating table.

So when he finally homed in on Autonomy, "Apotheker was determined not to miss out." He told his board of directors that HP needed to get something done in the software space, even if the price wasn't right. "It was out of frustration and desperation to a large degree," says Reuters' inside source.

Bada-bing, bada-boom, and there you go. The final deal was hammered out over red wine and shrimp cocktails in a posh French resort. An army of HP staffers audited Autonomy's business over the next month, but found nothing to worry about. And the rest is history.

The deal was consummated, but only long after Apotheker had left the building. Culture clashes with HP's bureaucracy clogged up Autonomy's high-growth machinery, and HP never took that planned trip down to Software Town. New CEO Meg Whitman prefers to spread her efforts across a metric ton of diverse markets, and the results aren't pretty: 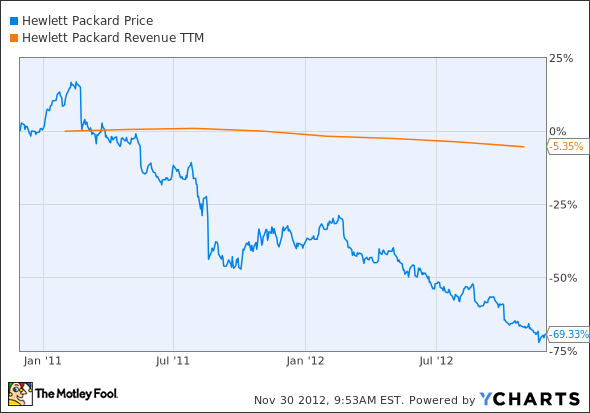 What if?
I can't help but wonder what HP would look like today if Apotheker's other options had worked out instead. Comverse is far too small to move HP's huge needle, but could have set the tone for a successful buyout binge across small-cap software specialists.

Amdocs or TIBCO would have been immediate game-changers, if only HP's board had loosened Apotheker's purse strings a few months earlier. Any of these three options would have created a whole new HP, where software and services reigned supreme and the low-margin hardware operations could have been sold to someone like Lenovo or a gaggle of private equity investors. Heck, Autonomy should have worked out that way as well if the board hadn't blinked at the wrong moment and fired Apotheker.

In the end, I believe that Leo Apotheker was basically fired for doing exactly the right thing. I'm not the first to say this, but HP's board of directors should be hung out to dry for their wishy-washy strategy and horribly wrong decisions. But 78% of HP's shares are in the hands of insiders or financial firms, none of which have felt inclined to rock the boat. The day of reckoning still hasn't arrived, well-deserved as it may be. And HP keeps running at full speed in the wrong direction(s).

Like Shakespeare's Hamlet, it's a sad story that only grows gloomier every time you turn the page.