This could be a textbook case of disruption in the making.

Over the years, there has been plenty of talk about Apple (AAPL 1.62%) ditching Intel (INTC -2.86%) for its Mac processors, just six years after Apple switched to Intel silicon in 2006. Apple has made dramatic improvements in its own ARM-based (ARMH) A-chips over the years, most notably with the custom "Swift" core found in the A6, made possible by Apple's instruction set license from ARM. 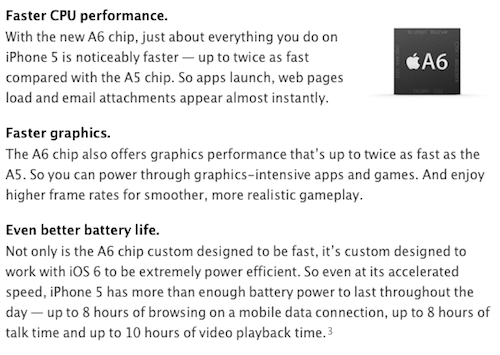 There are plenty of reasons why Apple may be interested in pursuing such a monstrous transition in the long term: increased vertical integration, cost savings, more control, product differentiation, and improved power efficiency, to name a few. The primary downsides would be a potential sacrifice in raw performance relative to Intel chips and the logistics of a major architecture transition for its entire software platform.

At what cost?
When it comes to the cost savings aspect of the debate, Nomura is offering up some thoughts. The analyst believes that such a switch could translate into bottom-line gains as high as $6.50 per share. With 940.7 million shares outstanding, that equates to about $6.1 billion in potential savings. For context, that would also be more than a 10% bump in the $58.92 in earnings per share that analysts are projecting for fiscal 2013.

Keep in mind that such a move would take many years, as there's no way that Apple could pull off such a major switch within the next 12 months, nor should it considering the current performance sacrifice.

A numbers game
Let's dig in a little bit further. The latest A6 found in the iPhone 5 is estimated to cost Apple approximately $17.50 per unit, which is the cost of manufacturing services from Samsung. That's up from the $15 estimate for the A5 as of October 2011, which is also fabricated at Samsung foundries. If you take a look at Intel's processor prices as of November 2012, you'll see that its latest chips cost far more.

For example, the beefiest 12-core Xeon X5675 found in this year's Mac Pro is priced at $1,440. A high-end quad-core i7-3820QM found in the fully loaded MacBook Pro goes for $568, and the ultra-low voltage dual-core i5-3427U found in 13-inch MacBook Airs can be had for $225. Obviously, Apple doesn't pay retail prices and uses its weight to get volume pricing, but it certainly pays much more than what it does for manufacturing services on its in-house A-chips.

Apple's costs would be more heavily weighted toward its more popular laptops like the MacBook Airs and entry-level MacBook Pros, but even if the company pays $350 per chip on average (a relatively conservative estimate), the cost savings on the 18.2 million Macs shipped last year if they had carried A6 processors instead could have theoretically totaled approximately $6 billion.

There are a couple things to note. While the A6 has made incredible performance gains in itself, they still don't compare to Intel processors in sheer horsepower. Also, the $17.50 cost per chip that Apple pays for manufacturing doesn't include its research and development costs for chip design, although we already know that Apple's R&D spending is generally quite efficient (just 2% of sales last year). It also doesn't include the licensing and royalty fees that Apple pays to ARM.

It's debatable whether Apple would pocket these potential cost savings or pass them along to consumers in the form of lower prices. Moving down in price would make Macs even more competitive with the Microsoft (MSFT 1.07%) Windows crowd, but investors also know how much Apple loves its margins.

Sea change
What's worse for Intel is that Nomura even thinks that if Apple successfully pulls off a switch to ARM, other PC OEMs might be tempted to follow suit in ditching Intel and further benefit the ARM army. The seeds for such a sea change are actually already now sown in the form of Windows RT, Microsoft's big push into supporting ARM-based chips in its latest version of Windows.

There are already ARM-based Windows RT tablets/laptops/convertibles just now hitting the market, like Dell's (NASDAQ: DELL) XPS 10 that carries a Qualcomm (NASDAQ: QCOM) Snapdragon or the Asus VivoTab RT with an NVIDIA (NASDAQ: NVDA) Tegra powering it. It's too early to know how consumers will vote, but PC OEMs could switch to ARM rather easily if Windows RT fares better than Windows 8.

Lessons learned
Intel has long been the processor king, particularly when it comes to performance, but students of The Innovator's Dilemma know that performance oversupply is the first sign of a shift in the basis of competition. Once the performance demands of the mainstream market are satisfied, the market will shift to competing on other dimensions like price or convenience.

Most average consumers don't need most of the sheer power of Intel's latest and greatest if their primary usage model is casual computing. They surely don't care about Intel's advantages in vertical integration and manufacturing prowess so long as their devices do what they need them to.

If we're witnessing a classic case of disruption as ARM invades from below, then Intel could be expected to retreat upmarket into a higher-margin professional market niche that does demand superior performance. This could be a textbook example of disruption unfolding before investors' eyes.