Investors have been waiting a long time for Apple (AAPL 1.62%) to hook up with the largest wireless carrier in the world, China Mobile (CHL). Back in June 2011 when Tim Cook was still COO, he was reportedly spotted at China Mobile's headquarters, further stoking the speculation that a pending deal was in the works. That anticipation certainly hasn't gone unnoticed, especially by the latter party.

One hurdle cleared, one to go
Until recently, the biggest hurdle with bringing the iPhone to China Mobile's network has been technical incompatibilities with the carrier's unique TD-SCDMA network. That's mostly now addressed as the iPhone 5 carries a Qualcomm (QCOM -3.30%) baseband chip that supports both TD-SCDMA and next-generation TD-LTE. This baseband processor, the MDM9615, is found inside the iPhone 5.

With that obstacle out of the way, it's now time to proceed to business negotiations. At a developer conference, China Mobile CEO Li Yue recently said, "Besides the technical issues, the business model and benefit sharing still need further discussion." That's a relatively vague comment, and it's hard to guess what types of benefits Li is looking for.

Leverage
China Mobile boasts 703.5 million mobile subscribers at last count, far more than its smaller rivals China Unicom (CHU) and China Telecom (CHA), who have 162.8 million and 155.5 million subscribers, respectively. As the largest carrier in the world by subscribers, China Mobile represents an unprecedented opportunity for the iPhone, and Li knows it.

Li has also undoubtedly seen the margin-sucking powers of the device and its expensive subsidies and is looking to mitigate a margin hit. Both China Unicom and China Telecom are official iPhone carriers that offer the device subsidized on contract. China Mobile doesn't want to let Apple in on its network too easily.

Come on in
The company did just let Nokia (NOK 1.08%) in with a version of its newest flagship device, the Lumia 920T. That handset goes on sale by the end of the year without contract (or subsidy). Incidentally, Qualcomm also provides the applications processor and baseband modem for the device.

Nokia doesn't carry the same weight as Apple does in terms of unit volumes. The Finnish company sold 6.3 million smartphones last quarter, of which 2.9 million were Lumia devices. Compare that to the 26.9 million iPhones that Apple sold and you can see why China Mobile is leveraging its position more aggressively with Cupertino.

Deal or no deal?
Even if a deal is announced soon, China Mobile tends to focus on the prepaid unsubsidized market, a segment that the iPhone has always had difficulty cracking due to its high price. That's the same reason that the iPhone has such a small market share in India, since Indian carriers haven't adopted the subsidy model.

Still, the iPhone has almost universally proven itself to be a subscriber magnet for carriers. Within the market for more profitable 3G subscribers, China Unicom and China Telecom have both seen their shares increase at the expense of China Mobile. 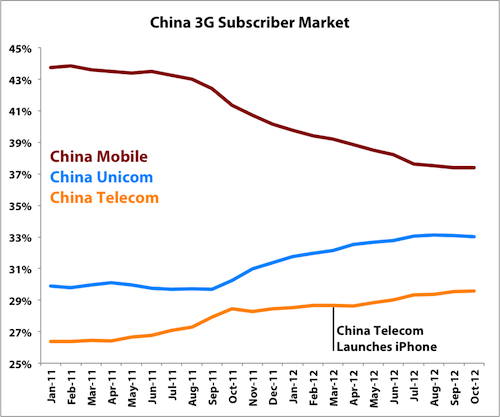 Bringing the iPhone to its network could help China Mobile recoup some of its market share losses in the 3G-subscriber market, while substantially broadening Apple's addressable market. This mutually beneficial deal needs to happen sooner rather than later, but will Apple give in to China Mobile's demands?