Hey there, fellow Netflix (NASDAQ:NFLX) shareholder! I hope you didn't break the bank in 2012 on antacids and super-strong coffee.

This year's stock chart might be slightly less heartburn-inducing than the 2011 version, but it still makes for a heck of a thrill ride: 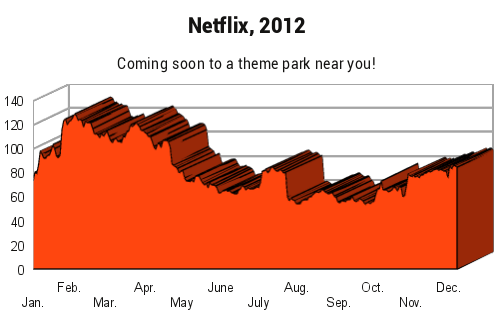 Coming off the Qwikster debacle in 2011, Netflix started out strong. Subscriber numbers shot through the roof in the January report, and so did the stock. But the gains wouldn't last.

Rapid expansion in the British Isles and Scandinavia put a hard ceiling on Netflix's bottom-line earnings and cash flows, while exaggerated seasonal effects led to disappointing subscriber additions over the summer. The stock is up 24% year to date, but mostly due to a low starting price. If you bought in near February highs, you're down 30% today.

What's the story?
And there's been plenty of good drama along the way. The streaming contract with Liberty Media's (NASDAQ:STRZA) Starz was allowed to expire in January, leaving Netflix without high-quality Walt Disney (NYSE:DIS) and Sony content. Disney came back to sign an exclusive deal directly with Netflix just last week, but the meat of that contract doesn't kick in until Disney's Starz deal expires in 2016.

Icahn's modus operandi is to push struggling companies into the waiting arms of willing buyers, so the investment sparked buyout rumors to high heavens. Potential bidders would include sector rivals Apple and Amazon.com, but also dark horses like telecom Verizon, which is taking a heavy interest in digital media lately.

But so far, none of these purported bidders have stepped forward, wallet in hand. The Icahn boost remains, even if the buyout angle is losing merit day by day.

This dramatic tug-of-war between Netflix bulls and bears has resulted in the unique chart you see above. Yearly highs spiked 150% above 52-week lows. That range is fully in class with speculative biotech firm Amarin, which sinks or soars like a jack-in-the-box with every FDA approval notice (or lack thereof). Amarin's market-moving catalysts may be more exciting than the mundane subscriber numbers that dictate Netflix moves, but you'd never know it from looking at the chart squiggles. Like love, volatility is blind.

Looking ahead
Now that Disney has a tighter relationship with Netflix, I can see a licensing deal for roller coasters based on Netflix charts. The climbs and the sudden drops would translate very nicely to this new medium.

Will the ridiculous twists and turns continue in 2013? I'm afraid so. This is still a fantastic stock for the long term, but Netflix might hurt you if you're looking for quick returns.

Netflix doesn't expect to report any net income for the next couple of years, choosing to divert any extra funds into international expansion. It took about two years to turn a profit in Canada, which was the first international market for Netflix streaming. Using Canada as a guide, Latin America might turn the corner by the end of 2013. Only then will today's skeptics turn bullish. Don't expect any large jumps in the first half of next year, unless Carl Icahn manages to sell Netflix, of course.