Give it a rest.

A colleague and I agreed the other day that if we could banish one word from the economic lexicon, it would be "uncertainty."

Uncertainty is the inability to predict the future. And if you say there's more uncertainty today (as many do), it follows that there had to be less uncertainty at some time in the past. It's just hard to quantify what that means.

Well, it was, anyway -- until now. A group of economists from Stanford and the University of Chicago started a website called PolicyUncertainty.com, which attempts to track uncertainty over time. They do it by measuring mentions of "uncertainty" in 10 major newspapers and changes to the tax code. It's a really smart idea.

What do their results show? Here's "uncertainty" over the last 27 years: 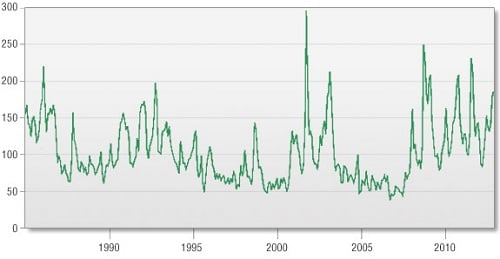 But here's what baffles me about this chart: Uncertainty bottomed -- and thus, certainty about the future peaked -- two distinct times in the last two decades:

That should give you pause about how seriously to take today's uncertainty problem.

You will never hear the cult of uncertainty say, "Boy, I wish we could go back to the predictability we had in 2007, just before the financial crisis I didn't see coming, the stimulus package no one could have predicted, and the health care reform bill no one foresaw." But look at the data, and that's what they're longing for.

The lesson of that is simple: The world is always uncertain. No one has any idea what will happen next. What changes is people's perception of uncertainty, and that's driven overwhelmingly by recalling the recent past, not by forecasting the future.

Take the top two issues the cult of uncertainty has beef with.

1. "I don't know what my tax rate is going to be next year."
Right, but that's always been the case. Congress and the president can change the tax code at any time; there is no such thing as permanent reform. Since 1913, the top marginal tax rate has been tweaked on average every 3.3 years, and many of the changes were unforeseen results of a new administration or a new war that needed funding. The world where you can say, "I know what my tax rate is going to be for the next X years," has never existed, and it never will exist. Get used to it.

2. "I don't know what health care costs are going to be next year."
Again, you never have known. For decades, health care costs have been one of the most elusive variables that exist. That's true not only of actual medical costs, but of regulatory changes, too. The Affordable Healthcare Act wasn't the first attempt to alter health care in America -- not by a long shot. We've been doing it like clockwork for a century:

At any time during the last century you could have said, "I don't know what my health care costs are going to be next year," citing the pending health-care reform of the day. If you're waiting for a world where no one tries to fiddle with health care, good luck; that, too, doesn't exist.

You have to learn how to deal with uncertainty. It's just part of life. Some is caused by policy, most is just sheer randomness -- but it's always there.

As an investor, the most dangerous part of fretting over uncertainty is that you're likely to do so at the worst possible times.

A few examples: People didn't start worrying about our economy's debt problem until the debt-to-GDP ratio was declining for the first time in 40 years. People didn't start thinking the stock market was a sucker's game until valuations set them up for the best returns in decades. And worries that the world would soon run out of oil peaked right at the start of the biggest domestic oil boom in half a century. If you followed what "uncertainty" was telling you about these three trends, you missed reality by 180 degrees each time.

Warren Buffett put it better: "If you wait for the robins, spring will be over."

Uncertainty will never die. But let's stop using it as an excuse to worry.