Please ensure Javascript is enabled for purposes of website accessibility
Log In Help Join The Motley Fool
Free Article Join Over 1 Million Premium Members And Get More In-Depth Stock Guidance and Research
By Doug Ehrman - Dec 16, 2012 at 10:30AM

Silver Wheaton is well positioned to benefit from the confluence of economic forces currently in play.

Frustration over the lack of progress on either side in averting the looming fiscal cliff flared on Thursday, as both Republicans and White House spokespeople publically blamed the other side for the continuing delay. The reality of the situation is that a resolution isn't likely to come until the eleventh hour, according to remarks made by Bruce Barlett in a recent interview. The consensus among economists, including at the Government Accountability Office, is that unless a compromise is reached, the economy will fall into a severe recession.

Should this happen, a defensive posture in commodities, especially precious metals, will be one of the few safe havens available. What's unusual about the prevailing state of affairs is that even if a compromise is reached, which remains the general expectation despite the lack of progress, precious metals look attractive. The Federal Reserve is pumping money into the economy so fast that inflation is inevitable. Given the dual-pronged appeal of precious metals, Silver Wheaton (WPM -0.98%) remains my favorite play in the space and a buy at current levels.

The fiscal cliff
For anyone late to the conversation, the fiscal cliff refers to the series of automatic tax increases and spending cuts that are set to take effect in 2013. Both sides of the aisle are positioning themselves as the party of reason and compromise, while simultaneously demonstrating their rigidity. House Speaker John Boehner attacked President Obama's stance on raising taxes on the wealthiest 2% of Americans. He has been clear on his unwillingness to target this group as a part of a compromise.

Similarly, Jay Carney, a White House spokesman, framed the issue in a light best suited to his stance: "What we have not seen from the Republicans is any movement at all on the fundamental issue. Republicans need to accept the fact that rates will go up on the top 2%." Is there not something disingenuous about referring to a compromise while explaining what your adversary "needs to accept?" It's not all that hard to believe that it was a failure to reach an agreement that led to a number of the problems we are now facing.

The monetary catalyst
In addition to the fiscal cliff, the Fed's current course of perpetual quantitative easing is adding to the appeal of silver. Under the policy, $40 billion per month is being pumped into the U.S. economy through the purchase of mortgage-backed securities. While drastic signs of inflation have been conspicuously missing from several recent releases of economic data, the level of bond buying in play will necessarily lead to higher levels of inflation.

Last month, the Federal Reserve's vice chair, Janet Yellen, said interest rates may need to be anchored near zero through early 2016; this represents a six-month extension beyond the original target. Many see Yellen as the heir apparent to the Fed chairmanship  at the end of "Helicopter" Ben Bernanke's current term in January of 2014. Her comment gives some color of what a Yellen Fed might look like.

Yellen's extended forecast  was accompanied by a discussion of her view that Fed policy might need to be specifically tied to employment targets  moving into the future. If the political maneuvering is removed from the investigation, we're still left with one simple truth: Quantitative easing is not going to end for the foreseeable future. Inflation is inevitable under such a framework. In inflationary periods, precious metals are an attractive store of wealth.

Why Silver Wheaton?
A natural question to ask at this point is "why choose silver over gold?" Generally, because the silver market is significantly smaller than the gold market, moves tend to be more dramatic. Looking at the following chart -- which uses the iShares Silver Trust (SLV -0.26%) as a proxy for silver and the SPDR Gold Trust (GLD -0.08%) as a proxy for gold -- you can see that while silver has outperformed by less than 5%, it has been far more volatile. This creates both larger risks and larger rewards. 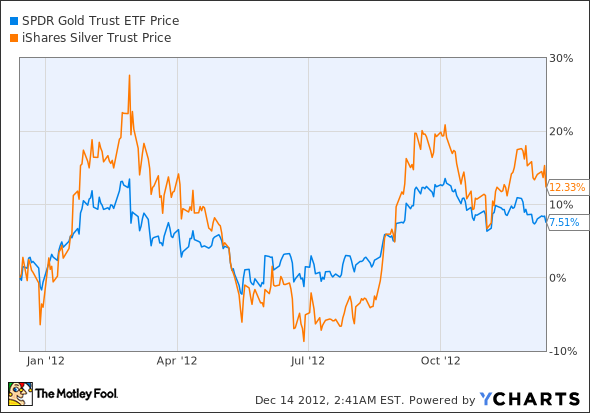 Silver Wheaton, as a silver streaming company, often has amplified reactions to significant shifts in the market. The company's business model calls for it to contract with miners to purchase silver production at a predetermined and fixed price. The company earns the spread between the agreed price and the prevailing market price. Silver Wheaton's cost of silver is currently $4.04 per ounce.

During a recession, miners tend to be treated like companies rather than as commodities. This reality has been part of the reason that silver stocks like Silver Wheaton, Pan American Silver (PAAS -1.63%) and First Majestic (AG -2.33%) have struggled of late. 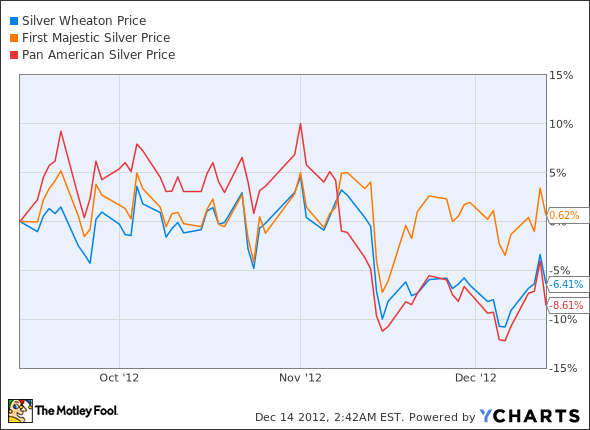 Only First Majestic is up in the past three months. This type of divergence can become significant, but when it reverses, the reward tends to be significant.

As Silver Wheaton remains my favorite play in the silver market, the stock looks well positioned to run higher over the long run as influences play out.