When Cisco Systems (NASDAQ:CSCO) said that it was done exploring consumer markets, it meant every word.

The second step in the re-enterprization of Cisco is under way, according to Bloomberg's anonymous sources. After unloading the Flip video camera business in 2011 and basic video conferencing brand Umi earlier this year, the Linksys brand of consumer-friendly network equipment is looking for a new home.

Linksys has been part of the Cisco family since 2003, when the networking giant paid $500 million for an instant foothold in consumer products. But Bloomberg's insiders expect a much smaller exit number because Linksys is such a low-margin brand. British megabank Barclays (NYSE:BCS) has allegedly been tapped to find a buyer, which could include TV set builders looking for a networking component.

So why is Cisco so set on leaving consumer sales behind? One look at this chart should give you a good idea: 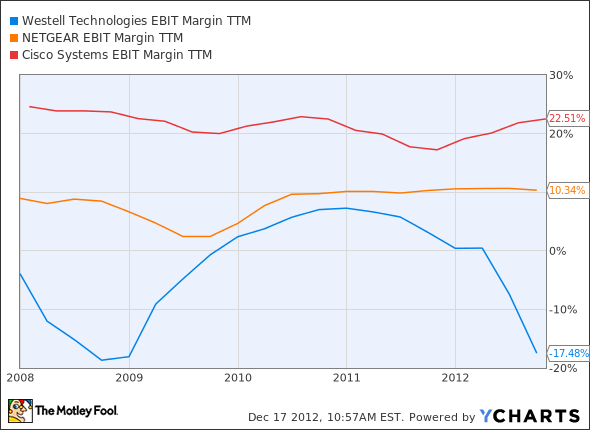 On top of that, Cisco really doesn't understand consumer tastes all that well. We got evidence of this earlier this year, when Cisco forced Linksys users to use manage their hardware settings via a decidedly enterprise-friendly interface -- to huge protests and plunging sales. Might as well hand this bundle of joy off to someone who actually loves consumers.

Assuming that Bloomberg's sources are on the money, Cisco would be left with just one significant consumer business: Set-top boxes and pay-TV software solutions. But Cisco is actually investing in these areas, which also fit into the company's larger ambition to rule digital video everywhere. So this might be the last of Cisco's anti-consumer moves.