This morning the U.S. Department of Commerce reported housing starts fell 27,000 to 861,000. Analysts had expected housing starts to fall to 865,000. While that is a 3% month-over-month drop and far below the 2 million level that was consistently seen in the boom years of 2004 to 2006, year-over-year housing starts are up 22%. 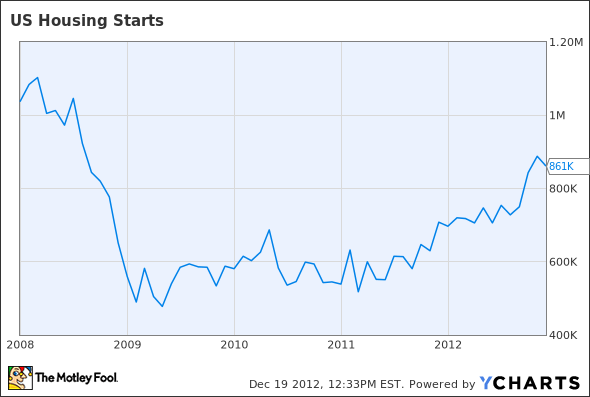 Score of indicators have shown growth in the housing industry for the past few months. Just yesterday the National Association of Home Builders' housing-market index rose two points from November to 47 -- its highest level since April 2006.

In fiscal-cliff news, yesterday House Speaker John Boehner proposed a "Plan B" option to fall back on in case talks fail. The White House rejected any such measure, as it would rather force Congress to come up with a compromise instead of kicking the can down the road. Today, the White House reiterated its rejection of Boehner's backup plan, saying it would veto the plan if it came to the president's desk. The Motley Fool has created a special page that will be updated with all of our latest fiscal-cliff coverage to help cut through the daily noise and give you the information and analysis you need as an investor. Head on over for everything you need to know about fiscal cliff 2012.

Dow stalwart Boeing (NYSE:BA) is up 0.36%. The defense contractors are up because the House and Senate joint defense conference decided on a $640.7 billion spending bill to fund the Defense and Energy departments for the coming year. The bill is expected to be voted on tomorrow by both the House and Senate and approved by the president shortly thereafter. Meanwhile, several of United Technologies' aerospace divisions will benefit as well.