As the New Year approaches, the financial sector can look back on 2012 fondly. Barring a breakdown in Washington, D.C., or some other "black swan" event, 2013 should be a solid year for money center banks across the globe, too.

The chart below clearly shows the surge in share prices this year for not only the main exchange-traded fund for the industry, SPDR S&P Bank (NYSE: KBE), but financial institutions such as  US Bancorp (USB 3.94%)Wells Fargo (WFC 7.55%)JP Morgan Chase (JPM 2.98%)Citigroup (WFC 7.55%), and Bank of America (BAC 0.72%). 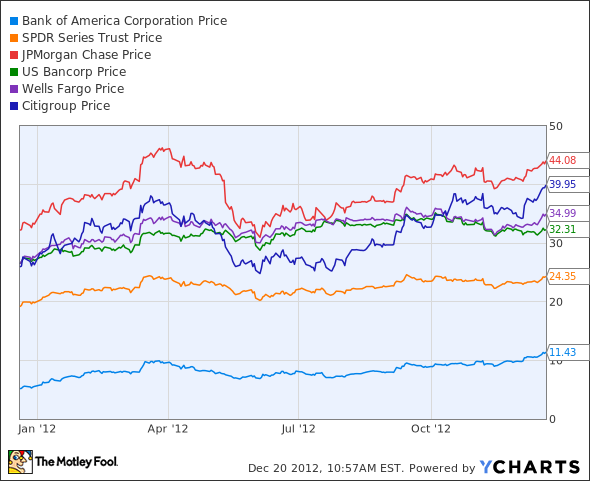 We are from the government, and we are here to help you
This recovery was set in motion during the depths of the Great Recession. In 2008, the Federal Reserve intervened on an unprecedented scale, purchasing trillions of assets to recapitalize the private financial system and save it from collapse. The actions of Federal Reserve Chairman Ben Bernanke and other central bankers to establish low interest rates have restored the major banks to profitability.

In a recent statement, Bernanke declared that low interest rates would remain until late 2015. That should allow banks to continue to do well by borrowing at zero and then lending at a higher rate to spur economic growth along with buying securities with a better yield.

As the table below shows, the present return on assets for Bank of America, JP Morgan, Wells Fargo, Citigroup, and US Bancorp are all higher than the five-year rate, evincing the bullish trends in the sector since the recession. US Bancorp in particular has turned in a superior performance by concentrating on basic banking services rather than the highly leveraged, risky trading and investment banking operations that resulted in heavy losses for the others.

Very attractive valuations
Even with these stocks' rising share prices, there are still compelling valuations to be found in the sector. Bank of America and Citigroup are particularly attractive. The chart below shows how the price-to-book value of both Citigroup and Bank of America plunged over the course of the recession. It also reveals how they're now starting to recover, thanks to cost-cutting, streamlining operations, and the overall economic recovery, which has led to an increase in banking business. 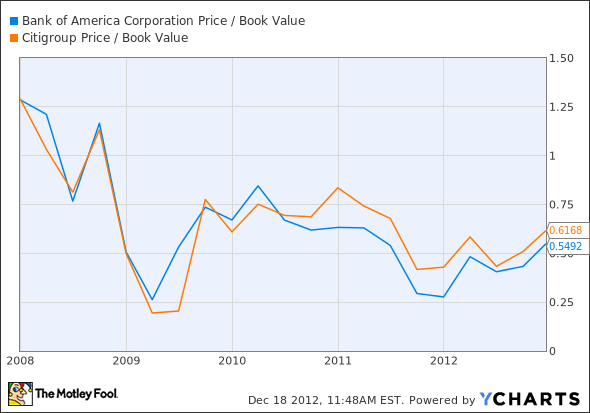 Which bank for the Foolish investor in 2013?
Bank of America still has upside for the Foolish investor. While it has risen the most of the bank stocks, there is still more to go in terms of reaching the price-to-book valuation of the others in the industry.  I believe that the doubling of Bank of America's share price for 2012 reveals that it is a value play, not a value trap. Warren Buffett investing billions certainly adds credibility to that position. In addition, Bank of America should able to start raising its dividend, which will increase the total return.