Walt Disney (NYSE:DIS) is hardly a Mickey Mouse operation. The longtime Dow Jones (DJINDICES:^DJI) component has more than doubled your investment in the Bob Iger era, absolutely crushing its Dow peers. But it's anything but a smooth ride. The stock has beaten the Dow in four of the last seven years, including 2012 -- but also fell far behind twice.

Will 2013 be another one of Disney's good years or another forgettable transition period like 2007 or 2011? 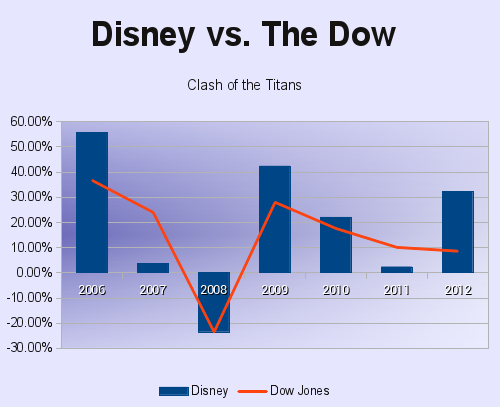 You win some, you lose some. Data supplied by Yahoo! Finance.

First up, there's change afoot in the penthouse of Cinderella's castle. The longtime CEO is also taking the chairman's seat in March of 2013, and thus will manage both strategy and operations for a while. He's set to retire in 2015, and we're all waiting for a proper succession order. This will be big news, and I'm hoping to hear it sooner than later.

The choice here can move markets in the short term and mouse-shaped mountains in the long run. Obvious candidates for the CEO post include longtime right-hand man Tom Staggs, Pixar genius John Lasseter, and Marvel Entertainment chief Isaac Perlmutter. The recent acquisition of Lucasfilm also gives Hollywood legend Kathleen Kennedy an outside shot at the top Disney job, given her status as president of the Star Wars empire. Any of these would be excellent choices, and I wouldn't bet on Iger reaching for outside talent here. There's no need.

Disney's film slate for 2013 doesn't exactly blow my mind. Marvel will milk its freshly established Avengers franchise with sequels to Thor and Iron Man, but the next full Avengers feature is scheduled for 2015. Even Pixar shifts down to deliver another sequel next year. For once, Disney's live-action lineup looks more interesting with James Franco starring in Oz the Great and Powerful followed by Johnny Depp and Armie Hammer in a reimagined The Lone Ranger.

These titles aren't likely to match the phenomenal success of The Avengers, so the bulk of Disney's fortunes will ride on theme park operations and cable networks. That's not a bad thing, mind you -- media networks stand for half of Disney's sales and two-thirds of its operating profits today. But headline movies are more than just gravy on top. Their success (or lack thereof) drives share prices with an iron fist, partly because they're easy headline fodder but also because they're the building blocks of Disney's long-term future.

So we might see Disney shares on sale in 2013, given the relatively soft studio schedule. If so, I'd be happy to grab a few shares for myself.