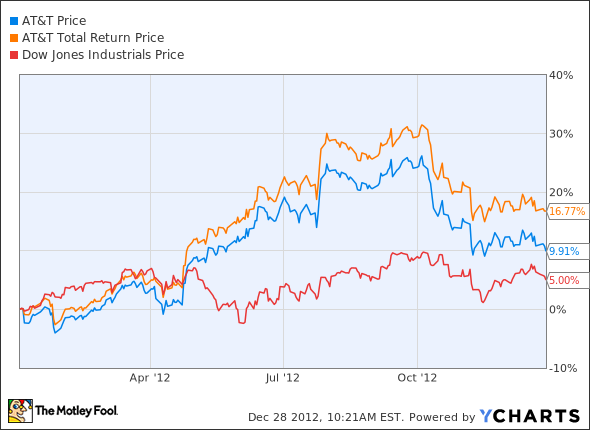 The wireless industry is changing fast right now. AT&T itself tried to shake things up by acquiring T-Mobile USA in 2011, but that attempt was shot down by regulatory processes. The resulting company would simply have owned too much radio spectrum and too many user accounts.

But T-Mobile found a new partner in prepaid expert MetroPCS (NASDAQ:TMUS). Third-place rival Sprint Nextel (NYSE:S) is taking a major cash infusion from Japanese peer SoftBank and using some of it to buy Clearwire (NASDAQ: CLWR). Both of these transactions are expected to close in 2013, giving industry leaders AT&T and Verizon (NYSE:VZ) a whole new battlefield to survey.

The spectrum crunch continues, and I wouldn't be surprised to see AT&T reaching for another opportunistic merger. A tiny tidbit like Leap Wireless (NASDAQ: LEAP) or U.S. Cellular (NYSE:USM) could give Ma Bell a much-needed spectrum infusion without raising too many regulatory eyebrows. After all, the SoftBank/Clearwire/Sprint agglomerate may actually surpass AT&T's spectrum reserves. What's wrong with fighting back?

This could also be the year for reducing or even ending the hefty subsidies on high-end smartphones. As it stands, AT&T sacrifices profit margins now for the promise of long-term revenue streams later while Apple (NASDAQ:AAPL) reaps the immediate benefits of these transactions. Gross margins would surge under a less subsidized policy, but management would watch the top line very closely to find out whether the idea is working.

Whatever happens, AT&T is the kind of stock you can watch through a long-term lens even in times of rapid change. 106 million wireless subscribers aren't going anywhere in a hurry, especially since AT&T remains a top provider of iPhone service.