Always in the market
PNC is one of the most acquisitive regional banks out there. It's gotten to its present fat size due almost entirely to buyouts. The most recent one was its purchase of the American assets of Royal Bank of Canada, RBC Bank (USA), which it consolidated into results earlier this year.

That cost PNC a bit under $3.5 billion, which it said was under RBC Bank's tangible book value. Not only did the company get a good deal, the Pittsburgh-based company in a single move became a presence in the South, the home of all of its new acquisition's 420-plus branches.

That was only the latest in a very long string of buyouts for PNC, a patient long-view operator that likes to work its strategy carefully and deliberately before going in for a strike. That strategy has put the company where it is these days, which is at No. 2 on the list of largest regional banking groups in terms of branches. At nearly 3,000 strong, it's eclipsed only by US Bancorp (NYSE:USB).

Considering that, you might expect the company to be fairly stingy in its dividend policy. Actually, it's not. If we match its payout ratio against a group of other banking majors -- Wells Fargo, US Bancorp, JPMorgan Chase, and fellow Rust Belt regional Fifth Third Bancorp (NASDAQ:FITB) it comes out ahead, and is the only one that crosses the .30 frontier: 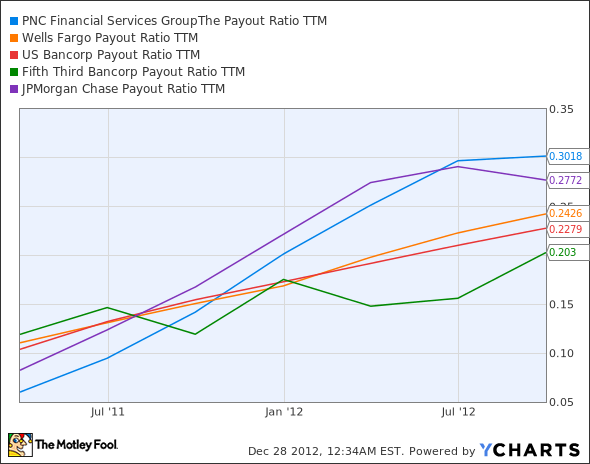 No funny stuff here
One big reason PNC can do so is because, despite those headline-grabbing acquisitions, the bank is at heart a fairly traditional lender.

For evidence, look at its most recent 3Q; corporate and retail banking was responsible for a full three-quarters of revenues. None of the company's other business units -- unfortunately including current industry high flyers like asset management and residential mortgages -- contributed more than a few percentage points to the total.

That conservatism served PNC particularly well during the financial crisis years, when it was one of the few banks that stayed liquid and profitable. So it likely could have survived without using TARP bailout money. It took the help anyway, and guess what it did?

That's right, it went shopping. The acquisition in that case was National City and it became one of the habitual acquirer's biggest acquisitions, at $5.2 billion.

It's pretty easy to sense a pattern here. PNC amasses a pile of money and rushes to the store if there's a sale. With the change it always seems to come home with, it doles out money to its partners. This is one financial that doesn't pump money into any expense it's not comfortable with. The other guys can have the shiny investment banks, or the big positions in derivatives, thank you very much.

April showers bring...
So should we expect anything from PNC in terms of a dividend hike? On the surface of it, there's no profoundly compelling reason for it to fatten its payout in order to pull up the share price. PNC stock currently trades at the low-ish end of its 52-week range, but not to the point of concern.

But a glimpse at its dividend history reveals an interesting fact: in every year since 2006, with only a single exception, the company has adjusted its quarterly payout beginning with its 1Q results. This dividend is paid in April. And the amount of the cut or increase is sharper than the decline or growth in net profit.

Will the bank follow this path in 2013? It seems likely. After all, it's a creature of tradition and habit. It's been doing well lately in terms of operations, and there don't seem to be a great number of takeover candidates hanging on the shelf at the moment.

This combination of improving (steadily, of course!) results -- thanks in no small part to the RBC Bank consolidation -- and the relative dearth of attractive takeover candidates potentially means more spending cash on hand... and, therefore, more to share with investors.