In a last-minute deal reached over the New Year holiday, we've avoided most of the so-called "fiscal cliff." Economists' and politicians' predictions of doom were muffled by a small deal that included mostly tax increases on wealthy Americans. This was a really big deal, right?

Everything from stocks to gold to oil are up on the fiscal-cliff deal, but we're continuing a long rise in the markets. Media reports might have you thinking that the Dow Jones Industrial Index (DJINDICES:^DJI) and S&P 500 (SNPINDEX:^GSPC) have been falling into an abyss as negotiations heated up, but the exact opposite is true. Stocks rose as tensions built in Washington, and for good reason -- the economy is getting better, cliff or no cliff. 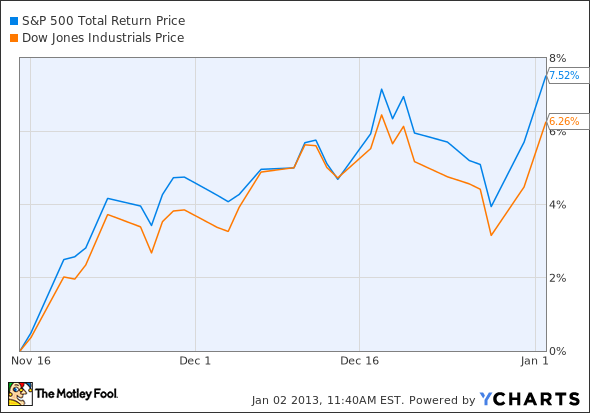 The real economy has already moved on
The terrible economy everyone said was coming as the fiscal-cliff deal was under negotiation hasn't been nearly so bad as expected. Today the Institute for Supply Management's index of purchasing managers rose to a reading of 50.7 in December, higher than November and at a level that indicates companies are growing. If businesses were concerned about the fiscal cliff, you would think December's reading would have been in the tank.

While day traders are focusing on the short-term fiscal-cliff rally, it's this economic data that should really be driving stocks. Today's data comes in addition to recent weeks' improving housing and unemployment numbers, which have driven the bullish trend you see in the chart above.

Caterpillar is up because there's renewed hope that a fiscal-cliff deal will add fuel to the economy and boost construction again in 2013. There was a recovery in building last year, and with the ISM index indicating more growth ahead, the stock has momentum behind it.

HP is up because of reports that it may sell underperforming business units. The reports stem from an SEC filing last week that included new language about the disposition of assets. HP has underperformed in a lot of businesses, so it's hard to know exactly what it would be selling at the current time.

Bank of America's investors are just happy not to hear about the fiscal cliff for a while. The stock has been extremely volatile as negotiations moved along, but investors who bought and held should be pleased. The problem is that Congress just set itself up for another debate over the debt ceiling in February. The debt ceiling actually has more power to impact the economy and U.S. banks than the fiscal cliff, so investors need to beware. If the U.S. doesn't pay its bills, the whole financial industry could be thrown into turmoil.