2012 wasn't exactly a banner year for tech stocks. Some of the industry's biggest names crashed hard as consumers and corporations adjusted their computing habits. Most of the early winners stumbled later in the year. But a handful of stocks ignored the trend and more than doubled last year. Here's a tasty sample of the 16 big winners I found.

Looking at these stock charts a year ago, you wouldn't have seen the jumps coming. All four of my examples lost money in 2011: 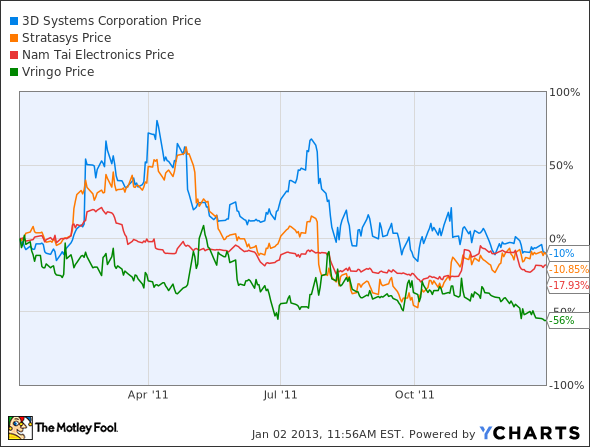 You'll notice that three of these four soaring stocks earned CAPS scores ranging from "decent" to "very good." All three have held perfect five-star scores in the last six months, losing that distinction as their share prices flew sky-high.

Stratasys and 3D systems climbed steadily all 2012 long as their 3-D printing systems moved from science-fiction fantasies to mainstream reality. Long-term investors saw this coming for years and years. It was just a matter of exactly when this brand-new industry would start to really blossom.

Nam Tai is another high-quality business with enormous opportunities ahead of it. The electronics manufacturing specialist has been on Foolish radars for some time, and the stock looked embarrassingly cheap at the end of 2011. The company landed a huge order from an anonymous LCD screen buyer in September, and it's safe to assume that Nam Tai is riding the coattails of Apple (NASDAQ:AAPL) nowadays. Like the 3-D printing stocks, this is a bullish story just waiting for its moment to be told.

Vringo is a totally different beast. A longtime favorite of stock market speculators, the company has made its core business of video ringtone technologies irrelevant by filing a few high-profile patent lawsuits. Judges and juries have largely sided with Vringo so far, which explains the spiking stock price. But it's anyone's guess whether the verdict will hold up on appeal, or if there's any business value to speak of beyond this unpredictable legal strategy. Hence, long-term investors wouldn't touch Vringo with a five-foot rake in 2013, earning the stock an ignoble one-star CAPS rating.