I laughed at two recent statements from athenahealth (NASDAQ:ATHN) CEO Jonathan Bush. One of the statements: "I really think this Internet thing is going to be big." Taken out of context, this statement might lead you to think Bush is a bit behind the times. On the contrary, I think his tongue-in-cheek remark was prescient.

A big thing
Bush made his statement on CNBC's Squawk on the Street on Jan. 2. His take was that the ever-changing world of health care will continue to drive physicians to the cloud. This dynamic of flux and further complexity should benefit athenahealth, according to Bush.

I think he's right. Recent history provides some support to the premise that physicians are moving to the cloud. Take a look at revenue trends from the past year for athenahealth compared with major rivals that don't operate in the cloud. 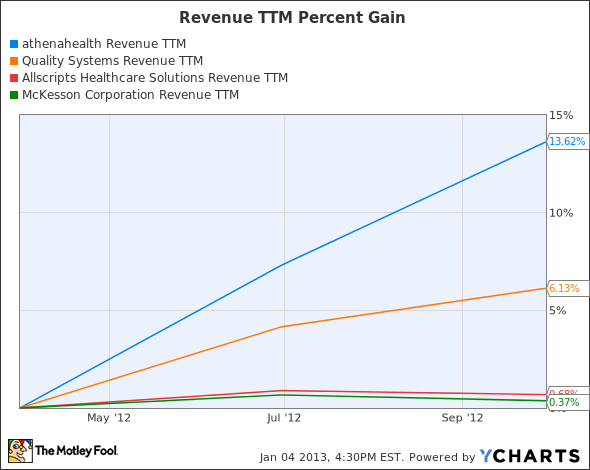 Both Allscripts (NASDAQ:MDRX) and McKesson (NYSE:MCK) have experienced anemic revenue growth. Sales for Quality Systems (NASDAQ:NXGN) increased at only half the rate of athenahealth. My hunch is that these trends will persist into 2013 and beyond. Yes, that Internet thing will probably be big.

Of mice and multiples
Shareholders of athenahealth reaped the rewards of this success last year. The stock jumped nearly 50% in 2012. If the company's sales continue to grow, won't the stock do likewise? As the modern translation of a poem written by Robert Burns says, "The best laid plans of mice and men often go awry."

This leads me to the second comment from Bush that caused a chuckle: "Athenahealth trades at a very high multiple," he said, and added that even a flatulent mouse in Brazil "will affect our stock price dramatically." There aren't many CEOs who are that straightforward -- or that descriptive. And while I'm not necessarily sure that gas emissions from rodents in South America will affect athenahealth's stock, I agree with the sentiment.

Athenahealth currently trades at a price-to-earnings multiple of 153. Some companies sport these sky-high trailing multiples but appear more reasonable on a forward-looking basis. Perkin-Elmer (NYSE:PKI), for example, has a trailing P/E of 1,745 but has a forward P/E of only 14. But that's not the case for athenahealth. Its forward P/E of 62 is also high.

I like the company's business model. I like the candor of its management. However, the stock is priced too expensively for me, especially considering that I'm not all that confident in the gastrointestinal restraint of Brazilian mice.