Every few months, wireless carriers inadvertently drop iPhone hints while they're bragging about their latest smartphone figures. That gives Apple (NASDAQ:AAPL) investors a chance to glean some insights on domestic iPhone unit sales. What did AT&T (NYSE:T) just offer up?

Ma Bell just announced that it sold over 10 million smartphones in the fourth quarter, setting a new record in the process. The previous record was set a year ago when the carrier sold 9.4 million smartphones. AT&T specifically said the figures included the "best-ever quarterly sales of Android and Apple smartphones." For reference, the most iPhones that AT&T has ever activated in a quarter was 7.6 million.

That's good news for both Apple and Google (NASDAQ:GOOGL), but AT&T's smartphone sales have long been dominated by the iPhone ever since it scored the first few years of device exclusivity in the U.S. There are two ways we can parse through this 10 million-unit figure: looking at how the iPhone has historically comprised AT&T's smartphone activations, and then how AT&T's iPhone activations have compared to the total iPhone units that Apple reports.

Step 1: Apple iPhones on AT&T
In recent years, the percentage of iPhones relative to total smartphones has been steadily rising. Last quarter, 77% of smartphones activated on Ma Bell's network were iPhones. During AT&T's aforementioned previous record quarter (Q4 2011) of 9.4 million smartphones, 81% of them were iPhones, another record figure. Also, Q4 2011 was the iPhone 4S launch quarter, which also adds some more context to how the iPhone was able to reach 81% of smartphones sold. 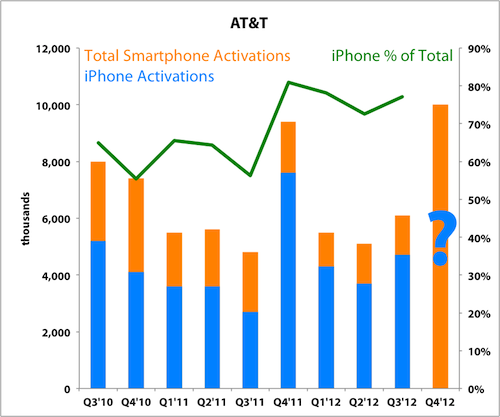 That metric has been above 70% for each of the past four quarters, and recent data from Kantar Worldpanel ComTech estimate that 72% of smartphones sold on AT&T during the 12 weeks ending Nov. 25 were iPhones. Kantar Worldpanel ComTech's time frame doesn't quite line up with the fourth quarter and doesn't include December -- it ended right as the holiday shopping season kicked off with Black Friday.

It's easily within reach for the iPhone to be 75% to 80% of AT&T's smartphone sales, especially since this was the iPhone 5 launch quarter we're talking about. If we use the midpoint (which is pretty close to the four-quarter average of 77%), we get close to 7.8 million iPhones sold.

This would indeed top AT&T's prior quarterly iPhone record of 7.6 million.

Step 2: AT&T iPhones on Apple
This trend is going the exact opposite way, with AT&T's portion of total iPhone sales steadily decreasing over the years as Apple expands its focus internationally. Not long ago, AT&T was activating 37% of all iPhones reported, but that figure has come down to 17% in the third quarter. Ma Bell had a little uptick to 21% in Q4 2011. 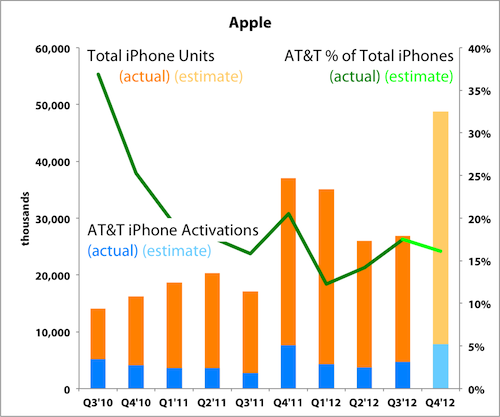 The average over the past four quarters is 16% of total iPhones. Using that figure implies total iPhone unit sales of approximately 48.8 million for Apple in the fourth quarter.

Checking your work
With the assumption that about 78% of AT&T's smartphone sales were iPhones and that AT&T will comprise 16% of total iPhone sales, Apple could be looking at 48.8 million iPhone units. It's difficult to track Street consensus estimates on Apple's digits simply by virtue of how many analysts cover the company as well as the fact that they're constantly tweaking their numbers.

Looking simply at two recent estimates from this week adds some context to the 48.8 million estimate. On Monday, Barclays analyst Ben Reitzes increased his fourth-quarter iPhone estimate from 43.5 million units to 47 million units. Piper Jaffray analyst Gene Munster is modeling for 45 million iPhones during the quarter, and he interprets AT&T's data as pointing to 8 million iPhone activations on Ma Bell's network.

Apple has a good shot of topping Street forecasts on iPhone unit sales this quarter. Is it Jan. 23 yet?