The Dow Jones Industrial Average (DJINDICES:^DJI) is down 67 points, or 0.5%, as of 2 p.m. EST. Among the heavier downdrafts, Verizon Communications (NYSE:VZ) is down 2.2% and AT&T (NYSE:T) lost 1.5%. What's going on with America's largest telecoms today?

At the heart of the matter, AT&T just released smartphone sales numbers for the holiday quarter. The announcement was heavy on cheerful spin and short on good news: Unit sales increased a paltry 6% year over year, landing just north of 10 million handsets.

Ma Bell rightly calls it a "record" quarter but never acknowledges that the days of double-digit hypergrowth are over. It looks like the low-hanging fruit has been harvested, which is bad news for margins and sales growth across the industry. The news spilled over into an industrywide rout that took all the momentum out of a recent rally: 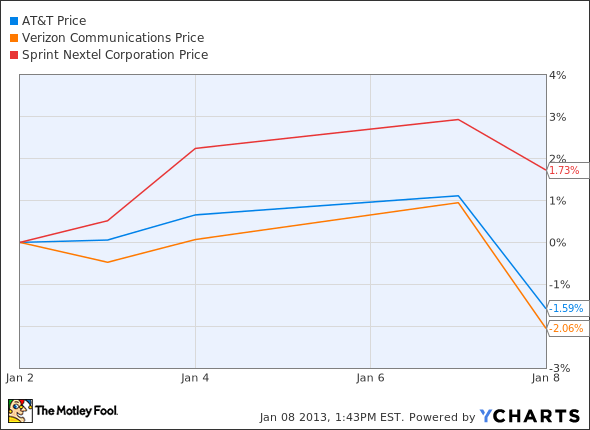 The most rosy-cheeked interpretation I can come up with would be that minor smartphone players Research In Motion (NYSE:BB) and Nokia (NYSE:NOK) crashed so hard that Apple and the Android army actually delivered halfway decent numbers. Even then, that doesn't help the most hard-suffering half of the handset industry. It might be time to look for the next, next big thing in mobile computing.