To help Foolish investors better understand the oil and gas boom in the United States, we are putting together a series of articles focusing on the major energy plays in the Lower 48. We'll need to rely heavily on these areas to achieve North American energy independence. Today we're going to take a look at the Anadarko Basin.

Introduction
As oil and gas basins go, Anadarko has been around for a while. The basin has been tapped for oil since the early 20th century, and new assessments and better technology have allowed Anadarko to continue as a valuable resource.

Through the mid-1970s, the Anadarko basin was tapped as a conventional oil and gas play. Up until recently, it wasn't economically feasible to extract the additional oil and gas that companies knew existed in the region. The Anadarko Basin consists of about 25 shales, which makes the area geologically complex. Formations in the basin were deposited on top of each other over time and many of the formations are grouped together. The Granite Wash, Woodford Shale, and Mississippian Lime currently produce much of the crude. Natural gas exploration is primarily in the Ardmore Basin and Woodford Shale.

The basin encompasses about about 70,000 square miles, mostly in Oklahoma, Kansas, Texas, and a small portion of Colorado. Depths can reach as far down as 40,000 feet in the play; it is composed of sedimentary rock. Shallow areas of the basin contain more carbonate rock reservoirs, while the deeper areas have more petroleum. The latest U.S. Geological Survey from 2011 estimates the Anadarko Basin to have 495 million barrels of oil, 27.5 trillion cubic feet (tcf) of natural gas, and 410 million barrels of natural gas liquids. But production for natural gas has already far outpaced the 2011 estimates. Oil from the Anadarko Basin is light, sweet crude, and most natural gas in the basin is "dry" gas, containing mostly methane. 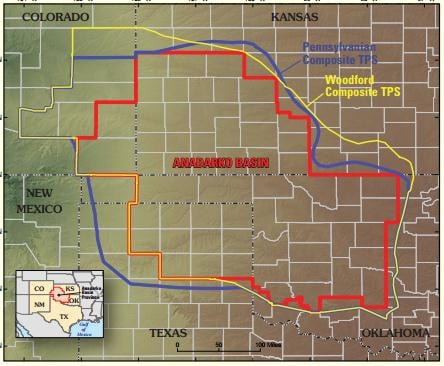 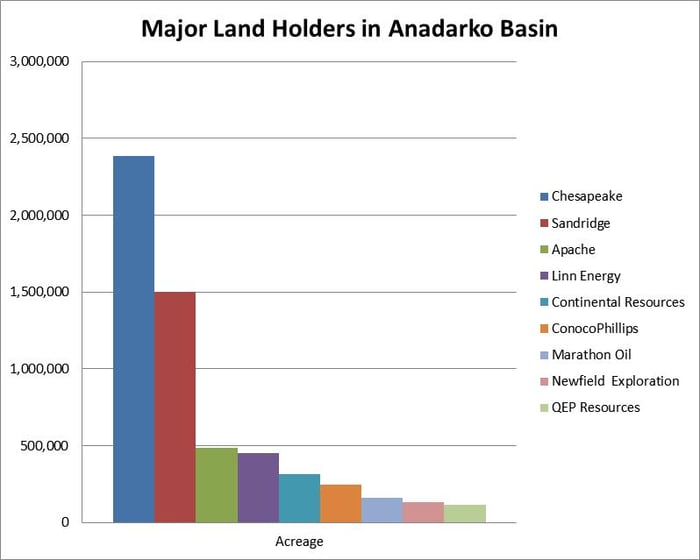 Current production
Companies have produced oil and gas from Anadarko for almost 100 years, but higher oil prices and horizontal drilling techniques have brought new profits from old fields. Production in the Anadarko basin has reached an estimated 125 tcf of natural gas and 5.4 billion barrels of oil as of March 2012. The charts below show the past six years of Oklahoma natural gas and oil production from the Anadarko Basin. 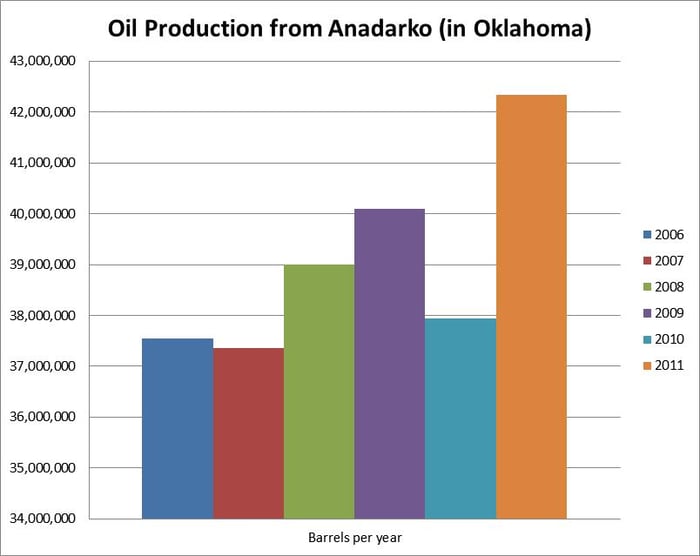 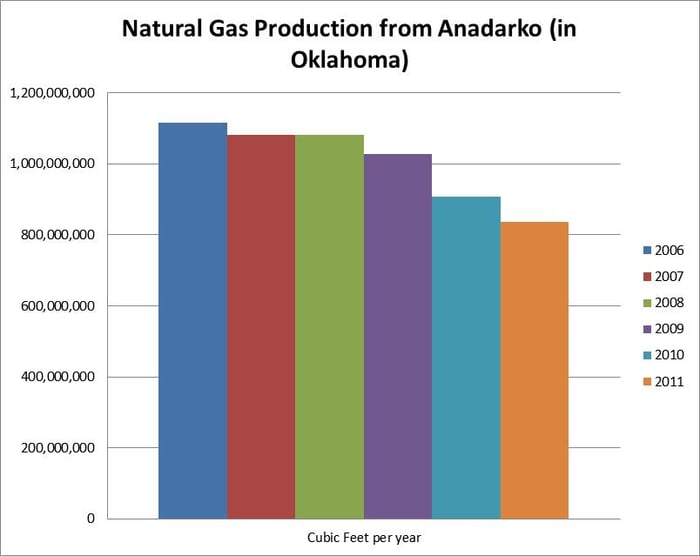 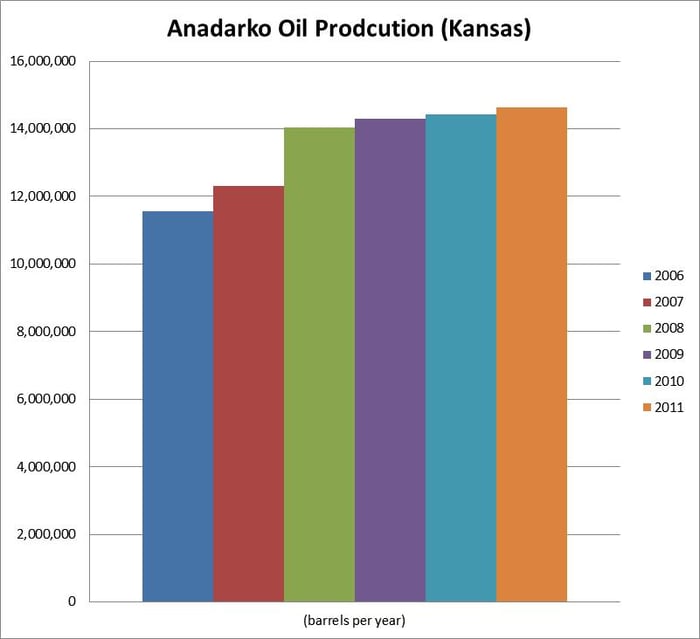 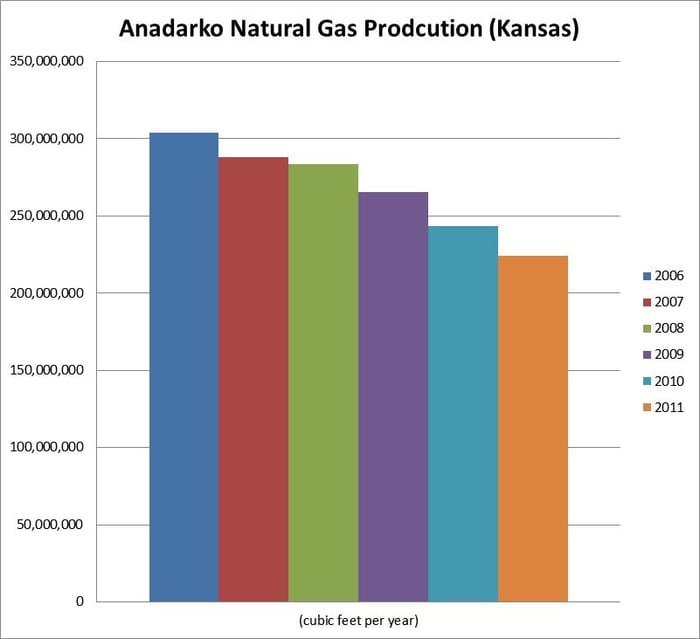 You can see from the graphs above that while natural gas production in Oklahoma and Kansas is going down, oil production is increasing. In addition to Oklahoma and Kansas, Texas is another state producing oil and gas from the Anadarko Basin. In 2011, Texas produced more than 500 million barrels of oil and about 94 billion cubic feet of natural gas from the basin. All three states report oil and gas production once a year, so information for 2012 hasn't been released yet. But looking at the number of active rigs in the basin, we see that in 2011 there were 190 active rigs, compared to 180 at the end of 2012.

It's difficult to tell right now whether or not companies will ramp up oil and gas production going into 2013. Some companies have said they'll increase production in Anadarko. Back in October, Chesapeake Energy increased its proven natural gas reserves by 160 tcf when it acquired two independent oil and gas companies in Oklahoma, and in November Apache said that it would increase its active rigs in the Anadarko basin. But we'll have to wait until Oklahoma and Texas release their official 2012 data to know whether the Anadarko Basin is slowing down or speeding up production.

Drilling economics
With multiple formations within the Anadarko Basin, it is possible to find almost any type of well. The Mississippian Lime formation is a shallow oil play with relatively low production costs, but the overall return is much lower than other tight oil plays like its northern neighbor the Bakken. There is also the Granite Wash formation, where the costs to drill a well are much higher, but each well is expected to have a much higher estimated ultimate recovery. The following table shows some of the essential information for three of the major formations within the Anadarko Basin:

Each part of the basin provides a specific opportunity for companies who specialize in different sectors. The Mississippian Lime is still a young play that has yet to be fully developed, but because of its shorter productive well life, expect these wells to be bought up by enhanced oil recovery specialists after a few years. The same will probably happen with the Granite Wash as well. Since it is already more expensive to drill in the region, though, it is possible that production will come at a slower pace than the Mississippian Lime.

The major disadvantage for the Woodford right now is that it is a much stronger gas play. With natural gas prices still relatively low, the returns from this region will be modest at best for the time being. The advantage for companies in the Woodford is that wells are generally less expensive to drill in comparison to the Haynesville-Bossier shale. A much closer comparison for the Woodford in terms of drilling costs is the Marcellus or Utica. So once gas prices make a turn for the better, a play like the Woodford will ramp up quicker to meet demand, while Haynesville players will still be suffering from lower returns on their wells.

One element the entire basin has in common is its proximity to Cushing, Okla. Cushing is one of the largest refining and storage hubs in the U.S. and the delivery point for West Texas Intermediate crude oil, one of the primary global pricing benchmarks for oil. Since the Anadarko Basin is so close, it makes moving product to Cushing much easier than most of the new unconventional shale plays.

The biggest problem facing the region is its lack of takeaway capacity. For decades, the trend of dwindling domestic supplies has resulted in a pipeline network designed to deliver oil from the gulf to the Midwest. Now, with new domestic supplies, the current oil infrastructure is unable to handle a flow reversal. Because of this, Cushing storage facilities are filling up without adequate means of getting this oil to the Gulf of Mexico.

Pipeline companies TransCanada (NYSE:TRP), Enterprise Products Partners (NYSE:EPD) and Enbridge (NYSE:EEP) are currently in the process of expanding takeaway capacity from Cushing. By reversing the Seaway pipeline and the potential expansion of the Keystone pipeline will provide a strong method for delivering oil from the Anadarko to the Gulf. 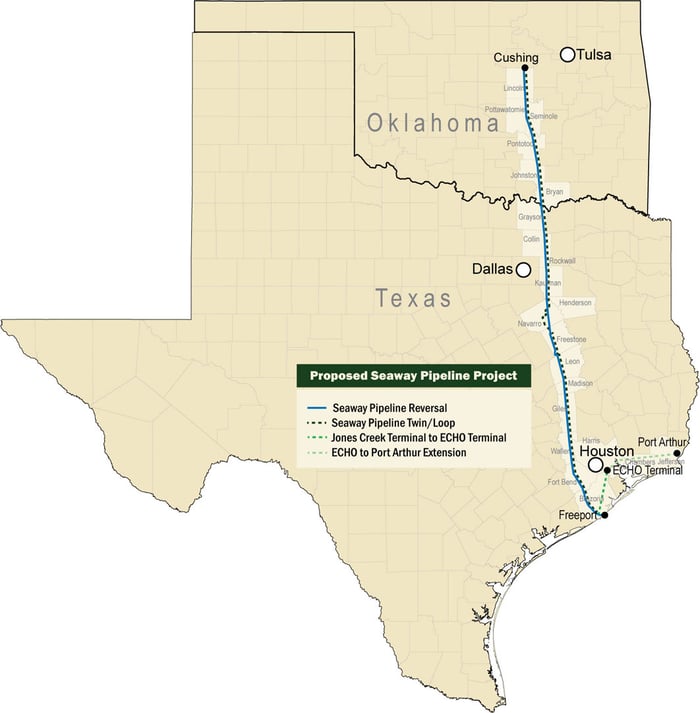 So, you want to buy into Anadarko?
Since the types of plays that exist within the Anadarko are so diverse, then it is no surprise that the purchase prices for these regions can vary as well. As recently as September, Atlas Reosources (NYSE: ARP) made a $40 million purchase for undeveloped assets in the Mississippian Lime formation from Equal Energy. The assets sold were valued at $2,500 an acre.

Conversely, Linn Energy acquired acreage in the Granite Wash play for $600 million from Plains Exploration (NYSE: PXP). The 20,000 acres within and 75,000 outside the play averaged a value of $6,300 an acre.

If natural gas prices continue to remain low, it is likely that prices for shale gas acreage will sell at a discount to oil plays.

What these Fools believe
There's lots of new interest in this old basin, but it's still hard to tell how important Anadarko will be to the future of American oil and gas. Some companies are hoping the basin becomes one of the big three plays, and with companies like Chesapeake Energy drilling its most profitable well ever in the basin, it certainly has potential. With Anadarko natural gas production going down, investors should focus more on oil production and how companies can keep well costs under control. Major land acquisitions will also be important to watch, as companies need the most lucrative land to extract the most resources.

Editor's note: Texas' oil production for 2011 was significantly lower than 5 billion barrels. The assessment has been corrected. The Motley Fool regrets the error.