Not too shabby. Even this Nokia (NYSE:NOK) bear can concede that the Finnish fallen angel's latest figures look optimistic for investors.

Nokia has provided preliminary results for the fourth quarter, and the company performed better than expected due to strong sales of both its Lumia and Asha lineups. The device business was able to achieve underlying profitability in the quarter, thanks in part to lower operating expenses. Nokia also said that the coming quarter is expected to be more challenging because of seasonality and competition.

With much of the turnaround hinging on Microsoft (NASDAQ:MSFT) Windows Phone and the Lumia family, let's start there.

Lumia unit sales came in at 4.4 million, which comprised an overwhelming two-thirds of the 6.6 million total smart devices Nokia sold during the quarter. The remaining 2.2 million units were Symbian smartphones. The platform transition away from Symbian toward Windows Phone has taken a little over a year, but has clearly taken shape at this point. Net unit sales have suffered amid the shift, but that was always part of the plan. 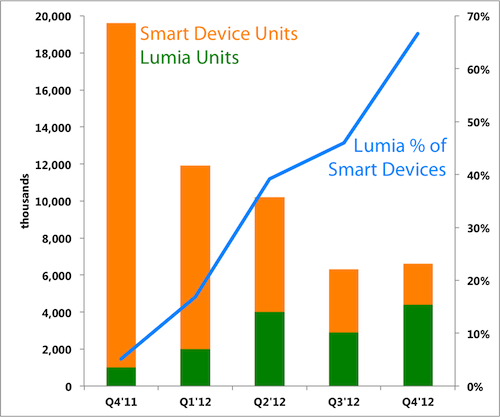 That shows just how much of Microsoft's smartphone ambitions are riding on Nokia, although the software giant is also expanding its relationships with other OEMs like HTC and Samsung to boost Windows Phone. Whether or not all of these efforts translate into broader market share gains for Microsoft will ultimately depend on how many units that rivals are able to sell.

Make room for Asha
Oddly, Nokia now reports three categories within the devices business (with a lot of overlap): smart devices, smartphones, and mobile phones. This change in reporting structure appears to be to accommodate for the Asha lineup, which are low-end smartphones that primarily target emerging markets.

Previously, Nokia only reported smart devices and mobile phones, with Asha sales only being included in mobile phones. Third-quarter mobile phone units were 77 million shipped, including 6.5 million Asha units. It's unclear why Nokia would use such a confusing structure, since the new "smartphones" category overlaps with both of the other categories.

Turnaround talk
The company expects the devices and services business to post an adjusted operating margin of breakeven to positive 2%, which is much better than the negative 6%, plus or minus 4%, that it was previously expecting. Devices and services also benefited from a one-time royalty payment of 50 million euros.

This is undoubtedly from the settlement with Research In Motion (NYSE:BB) over the BlackBerry maker's use of WLAN technologies. RIM disclosed a one-time payment for that exact amount at the end of December, and will continue paying unspecified ongoing royalties.

Analysts and institutional investors alike have been losing patience with CEO Stephen Elop, with some saying Elop has to prove himself by mid-2013 less he risk getting axed. It looks like Elop's all-in bet on Windows Phone is beginning to work. He might be able to pull off a turnaround.