The S&P 500 (SNPINDEX:^GSPC) dividend payout ratio -- the percentage of earnings paid out to shareholders as dividends -- is at an all-time low: 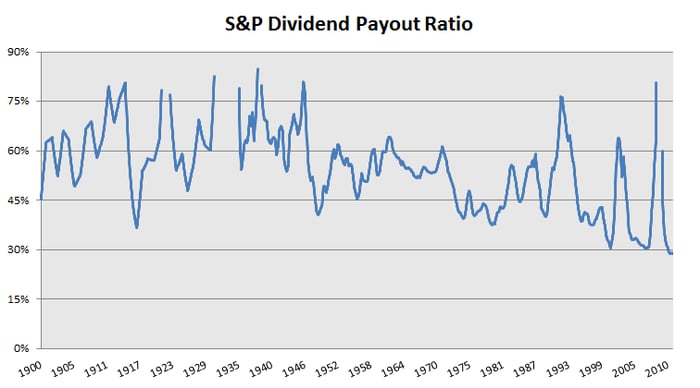 Frankly, this is a tragedy.

Instead of writing checks to shareholders, companies are instead spending incredible amounts on share buybacks and acquisitions, both of which have a dismal history of providing shareholder value. Share buybacks tend to ramp up when shares are most expensive, subsidizing existing shareholders at the expense of loyal shareholders. And acquisitions are often done at irrationally high prices, allowing management to "empire build" but rarely creating lasting value.

There are still some companies -- Altria (NYSE:MO), AT&T (NYSE:T), General Mills (NYSE:GIS) -- that pay out solid dividends and have been doing so far years. But they are a dying breed. If this doesn't change, it could affect aggregate market returns going forward.

Last month, I sat down with Robert Arnott, CEO of Research Affiliates and one of the brightest financial minds of recent history. I asked him whether low dividends are a disservice to investors. Here's what he had to say. (Transcript follows, and the part relating to the fiscal cliff is now dated.)

Morgan Housel: The dividend payout ratio for the S&P 500 has fallen dramatically. It was recently in the last few years near a 50-, 60-year low. Is that a disservice to investors?

Robert Arnott: I think it is. I think dividends are important in a number of ways. For now, unless fiscal cliff boosts the tax rate on dividends to 44%, as seems increasingly likely, it's a tax advantage distribution, taxed pari pasu with long-term cap gains. So I think paying dividends is a tax-advantaged way to reward your shareholders. It's a signal of your confidence in your ability to produce earnings above that dividend, because companies don't pay dividends above a threshold where they have confidence that they can maintain those dividend payouts. Nobody wants to cut a dividend.

It also has a subtle but very important effect in reining in mindless empire building by -- there's an arrogance to the notion that our best internal reinvestment opportunity within our company is better than our shareholders' best reinvestment opportunity in the entire world of investing. And that's what tacitly being said by hanging on to all of the earnings. So I think a lot of it goes to fund empire building, which is a disservice to investors, because often it winds up being used to fund dumb projects.