For the past year, Apple (NASDAQ:AAPL) and Samsung have dominated the headlines in the incredibly competitive smartphone market. Not only because the two are the leading smartphone vendors in the world, but also because they're locked in escalating legal battles and souring business relationships.

In the third quarter, Samsung's newest Galaxy S III became the top-selling smartphone model in the world, besting both Apple's iPhone 4S and iPhone 5 individually. With both models combined, Apple outsold its South Korean rival, but iPhone 4S sales were ramping down heading into the launch of the iPhone 5, which was only on sale for about nine days during the quarter.

Should the iPhone maker be concerned with Samsung's latest and greatest smartphone achievement?

Samsung has now said that its flagship Galaxy S series of smartphones has topped 100 million in unit sales. First off, Samsung is very clear that this figure presents channel sales and sell-in, as opposed to sell-through to end users. The company does have incredible global scale and distribution, which is one of its key advantages over rivals.

The South Korean giant even helpfully breaks that total down by model.

That's an awful lot of Galaxy S shipments, and evidence as to why Samsung is Google's (NASDAQ:GOOGL) best Android friend right about now. No other OEM is helping proliferate Android for Big G's benefit to the same extent.

More importantly, how do those figures stack up against Apple's unit sales over approximately that same time?

The big picture
Apple has sold over twice as many iPhones as Samsung's Galaxy S series in about the same time. Apple only has one product, which is its flagship. The Galaxy S lineup is currently Samsung's flagship, but it offers plenty of other models in addition. 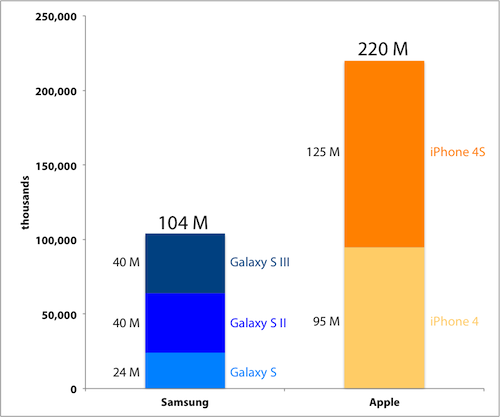 There are a couple of notes on this chart. Apple doesn't disclose its product mix specifically, so investors don't know exactly how many of each model it's sold. I'm using its total iPhone unit sales from Q2 2010 through Q3 2012, and categorizing them into which iPhone model was the flagship at the time. The iPhone 5 was only available for just over a week in that time, with the just-closed (and yet to be reported) Q4 2012 being its first flagship quarter, so it's not shown separately.

Samsung's figures span from June 2010 when the original Galaxy S launched through Jan. 13, 2013, and only represent smartphones in its Galaxy S series.

Still, the big picture is that Apple's flagship offering has shipped more than Samsung's over the past couple of years by a wide margin.

One of these is not like the other
There's another important distinction to mention. Both companies report their total figures including sell-in to the channel, but Samsung has no meaningful direct sales. Consumers can't just swing by Samsung's website to buy gadgets directly from the company; they must instead go through a third-party retailer. The company is now putting up its own retail stores (that look strangely familiar), but that initiative just started in August so sales are likely negligible relative to Samsung's overall results.

In contrast, the vast majority of Apple's sales are directly through its website or retail stores, with third-party resellers taking a backseat. That means that channel sell-in comprises an overwhelming percentage of Samsung's unit shipments, while actual sell-through to end customers is the bulk of Apple's figures.

Stateside sales
We can even take this a step further. As part of the pair's legal battle, they disclosed U.S. unit sales data through court filings. Throughout all of 2011 and the first half of 2012, Apple sold 51.4 million iPhones stateside while Samsung moved 5.6 million units in its Galaxy S series included in the lawsuit. That doesn't include the Galaxy S III that launched in May 2012, but does include five other models that were sold domestically. 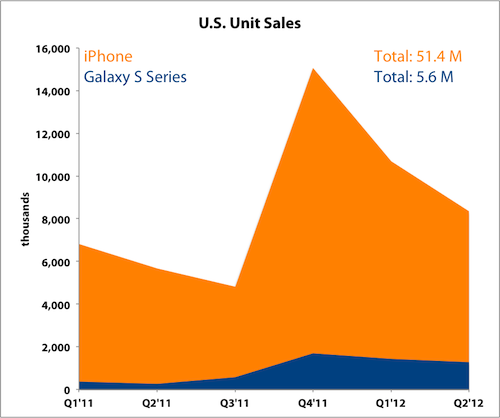 That shows that most of Samsung's gains over the past couple of years has been primarily in international markets, while Apple continues to dominate the domestic landscape. That's just another reason why it's time to start an iPhone family.