Every investor can appreciate a stock that consistently beats the Street without getting ahead of its fundamentals and risking a meltdown. The best stocks offer sustainable market-beating gains, with improving financial metrics that support strong price growth. Let's take a look at what iRobot's (NASDAQ:IRBT) recent results tell us about its potential for future gains.

What the numbers tell you
The graphs you're about to see tell iRobot's story, and we'll be grading the quality of that story in several ways.

Growth is important on both top and bottom lines, and an improving profit margin is a great sign that a company's become more efficient over time. Since profits may not always reported at a steady rate, we'll also look at how much iRobot's free cash flow has grown in comparison to its net income.

A company that generates more earnings per share over time, regardless of the number of shares outstanding, is heading in the right direction. If iRobot's share price has kept pace with its earnings growth, that's another good sign that its stock can move higher.

Is iRobot managing its resources well? A company's return on equity should be improving and its debt-to-equity ratio declining if it's to earn our approval.

By the numbers
Now, let's take a look at iRobot's key statistics: 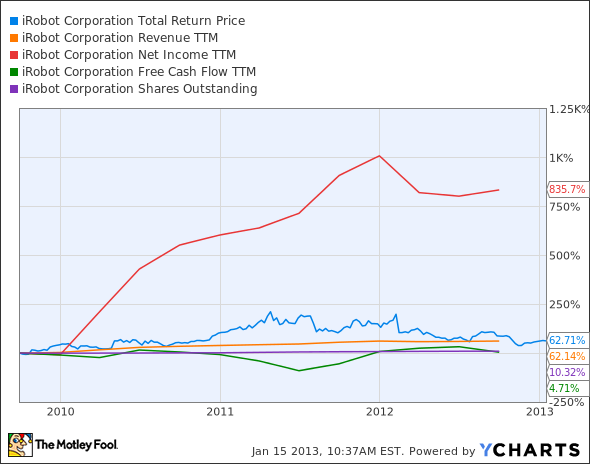 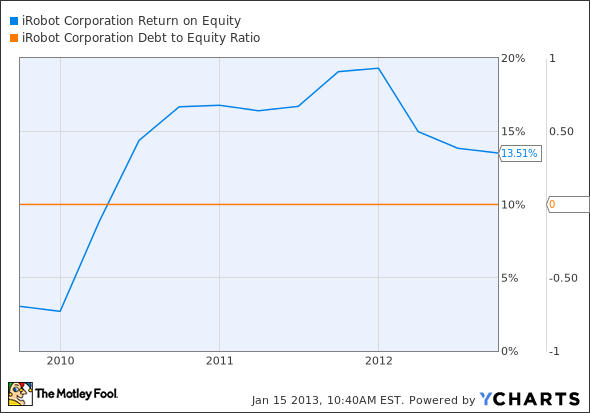 How we got here and where we're going
iRobot pulls together a strong six out of seven possible passing grades. Its net income has soared, which has helped on all but one criteria. It's important to examine that one exception, since a three-year growth in free cash flow of only 5% is a bit concerning. Is this the sign of long-term stagnation, or is it merely indicative of a successful, but difficult, turnaround?

iRobot has been transitioning away from military robotics as the Pentagon pulls its ground patrols out of combat zones and focuses more on aerial robotics. In its most recent quarter, home robots  made up a full 76% of iRobot's revenues, and the gross margin on these bots is superior to those sold by its defense segment. In the same quarter three years ago, home robots only made up 56% of the company's sales, and accounted for only half as much revenue . That's a good sign, but investors would like to see more, as the stock has fallen significantly over the past year.

Two major events -- or rather, the same event duplicated -- contributed to depressing the company's stock price in 2012: disappointing guidance early in the year and more disappointing guidance at the end of the year. However, at this point, iRobot's P/E is at its lowest point in the company's life , and home robot sales are clearly on the upswing -- according to my fellow Fool Tamara Rutter, iRobot's Roombas now account for a whopping 15% of all global vacuum industry sales. Put that bowling ball on your suction hose , Oreck!

One problem with iRobot's momentum is that it remains focused on the same basic housecleaning functions. Our Foolish tech analysts didn't see anything new from iRobot at this year's CES, just upgrades to known bots. The comparisons to other known bot specialists make this a bit starker.

Amazon.com now controls a system of warehouse optimization robots called Kiva that could reshape the warehousing and shipping landscape if they're developed into an end-to-end solution rather than just a faster means of getting stuff from A to B. iRobot has been developing a telepresence robot for medical use, but will that ever see wider use than Intuitive Surgical's robotic arms? It might, as the robotic telepresence market could command $13 billion in sales by 2017. However, in this writer's humble opinion, a surgical robot is a far more complicated -- and thus, more easily defensible -- business than an iPad on wheels, which is basically what iRobot's telepresence 'bot looks  like.

Expanding its business is the right decision, but it will take time to find out how much benefit iRobot will see from its new line of robots. It would be nice to see an exciting new consumer 'bot that fulfills a pressing need, but developing the right sense of automation is a matter of great finesse. I'd love a robot that can walk my dog, but what happens if he wants to chase a squirrel on the sidewalk?

Putting the pieces together
Today, iRobot has some of the qualities that make up a great stock, but no stock is truly perfect. Digging deeper can help you uncover the answers you need to make a great buy -- or to stay away from a stock that's going nowhere.