Every investor can appreciate a stock that consistently beats the Street without getting ahead of its fundamentals and risking a meltdown. The best stocks offer sustainable market-beating gains, with improving financial metrics that support strong price growth. Let's look at what CSX's (NASDAQ:CSX) recent results tell us about its potential for future gains.

What the numbers tell you
The graphs you're about to see tell CSX's story, and we'll be grading the quality of that story in several ways.

Growth is important on both the top and bottom lines, and an improving profit margin is a great sign that a company's become more efficient over time. Since profits may not always reported at a steady rate, we'll also look at how much CSX's free cash flow has grown in comparison to its net income.

A company that generates more earnings per share over time, regardless of the number of shares outstanding, is heading in the right direction. If CSX's share price has kept pace with its earnings growth, that's another good sign that its stock can move higher.

Is CSX managing its resources well? A company's return on equity should be improving, and its debt-to-equity ratio declining, if it's to earn our approval.

Healthy dividends are always welcome, so we'll also make sure that CSX's dividend payouts are increasing, but at a level that can be sustained by its free cash flow.

By the numbers
Now, let's take a look at CSX's key statistics: 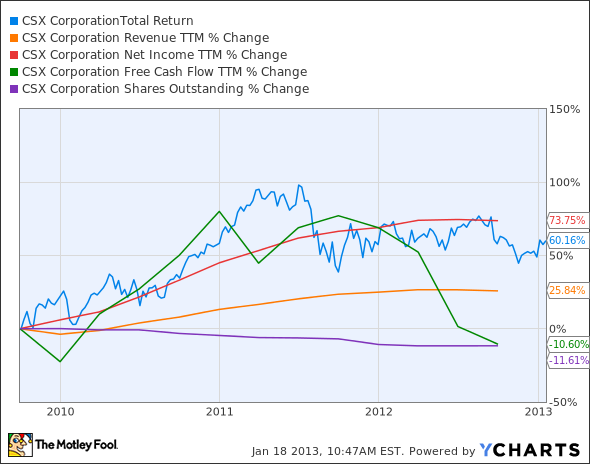 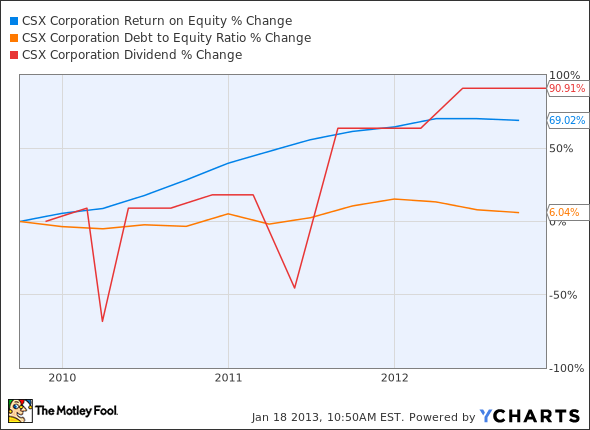 How we got here and where we're going
CSX isn't quite jumping the rails with five out of nine passing grades, but it's heading into a dangerous curve thanks to declining free cash flow. Can this railroad push its cash flow higher to ensure a more sustainable dividend payout, and so that it can maintain its operations more efficiently? Let's take a look.

As my fellow Fool Dan Caplinger points out, CSX has been hit hard by a declining coal industry. Patient investors have been waiting for this problem to correct itself, but 2012 was not the year for that turnaround. CSX relies on coal shipping, and although its revenue doesn't exactly track that of its coal producing customers Alpha Natural Resources (NYSE: ANR) and James River Coal (NASDAQ: JRCC), it does bear some similarities. James River's revenue peaked in the first quarter of 2012, and Alpha's peaked in the second. CSX's trailing 12-month revenue flatlined over its last three quarters as it's had to cope with these declines in its partners' top lines.

However, the long-term upside in the coal transportation business is that while coal may be on the outs with North American energy producers, it remains in demand everywhere else. In the past five years, American coal exports have nearly doubled, and the late-year spikiness seen at the end of 2012 means that we might see another big rise in 2013: 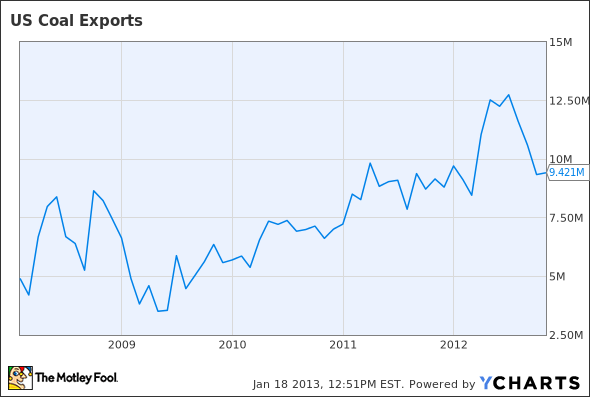 CSX should still be seeking out alternative sources of revenue, however. Energy production in China, a major importer of coal, declined throughout 2012, which is an ominous sign for coal export prospects. One possibility is to get involved with other energy products, especially as its market area becomes increasingly populated with natural gas drilling rigs. Union Pacific (NYSE:UNP) has already taken advantage of such a strategy in the Bakken region between the United States and Canada, but it's worth noting that there is nothing comparably lucrative in non-coal hydrocarbons on the Eastern seaboard. Investors may need to ponder the possibility that CSX's growth will remain muted in 2013.

Putting the pieces together
Today, CSX has some of the qualities that make up a great stock, but no stock is truly perfect. Digging deeper can help you uncover the answers you need to make a great buy -- or to stay away from a stock that's going nowhere.