I'm not sure that's accurate, but it wouldn't surprise me. There are a number of reasons why we hesitate to plan for our financial future. One of the biggest ones is that we've confused the process of planning with the end product, a plan.

Financial plans are worthless, but the process of planning is vital. Let me explain the difference. 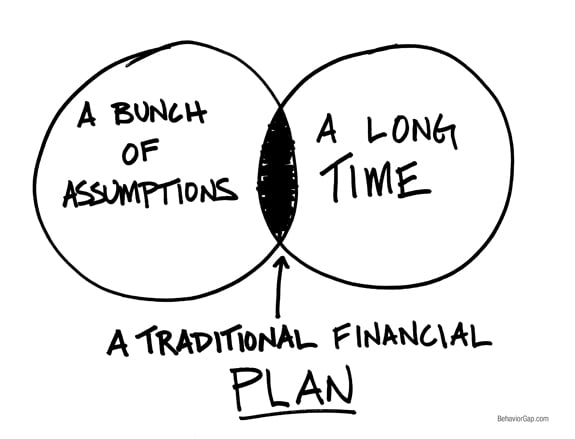 If you have been through this process, you know that it's very uncomfortable. We know that no matter how hard we try, we will definitely be wrong.

This is one of the cruel ironies of any plan: You don't have the information you need when you start. This is true when you start a restaurant, a business, or plan the rest of your financial life.

If we accept the fact that even the best plan will be wrong, we can focus our energy on the process of planning instead of obsessing over the assumptions.

Sure, we need to chart a course to where we think we're headed. It will involve making some assumptions about the future. But they're just guesses; make them and move on.

Think of this as the difference between a flight plan and the actual flight. Flight plans are really just the pilot's best guess about things like the weather. No matter how much time the pilot spends planning, things don't always go according to the plan.

In fact, I bet they rarely go just the way the pilot planned. There are just too many variables. So while the plan is important, the key to arriving safely is the pilot's ability to make the small and consistent course corrections. It's the same for investing. It's about the course corrections, not the plan.

Once you have a general idea of your own destination, the focus should shift to what you can do over the short term to get there. Focus on the next three years not the next 10. Thinking in shorter time frames inspires us to act instead of worrying about all of the things that are out of our control.

So set a course quickly, realize that you'll be wrong, and plan on making course corrections often.