It was an exciting week for the stock market, as companies from all walks of industry stepped into the limelight to report quarterly earnings. Among them was luxury handbag maker Coach (NYSE:TPR). Unfortunately, Coach announced fiscal second-quarter earnings that left a lot to be desired. Shares plummeted more than 15% on the news.

However, it wasn't just disappointing quarterly results that caused the stock to have one of the worst trading days in its history. We'll get to the company's second-quarter sales results in a minute. But first, let's take a closer look at what's really driving down shares of Coach, and whether this creates an opportunity for shrewd investors.

What's in the bag?

Coach is attempting to reinvent itself as a "lifestyle" brand. It seems the leather goods company is in the midst of an identity crisis as it struggles to keep up with fast-growing competitors, such as Michael Kors (NYSE:CPRI). The company's new brand strategy is worrisome for more than a few reasons.

For one thing, Coach should be working to differentiate itself from the competition -- not mimic it. Regardless of this, the leather goods maker plans to put a heavier focus on apparel and accessories, much like Michael Kors' namesake brand.

However, unlike other successful lifestyle brands including Ralph Lauren (NYSE:RL), Tory Burch, and, yes, Michael Kors, Coach's brand doesn't share its name with a famous fashion designer. As a result, the retailer will likely have to spend significantly more on marketing to successfully position itself in the lifestyle category, according to Bloomberg.

Another concern is that margins could suffer as Coach puts more of an emphasis on women's apparel and accessories. Coach currently trumps rivals in terms of margin strength, generating a gross margin of more than 72%. Meanwhile, both Michael Kors' and Ralph Lauren's margins come in around 59%.

Bag it or buy it?
The sudden shift in strategy comes on the heels of a weak holiday season for the retailer. In fact, The Wall Street Journal reported that Coach's North American sales grew more slowly than the broader handbag market for the first time since the company went public more than a decade ago. Investors are right to worry, particularly when North America makes up a whopping two-thirds of Coach's revenue.

In hopes of turning its luck around, Coach launched the Legacy line of handbags ahead of the all-important shopping season. However, the initiative failed to boost sales for the retailer. As a result, the company reported earnings of $1.23 a share for its second quarter, whereas analysts were expecting $1.28 a share for the period. Revenue also came up short at $1.5 billion, compared to analysts' average forecast of $1.6 billion.

But it wasn't all bad news. On a positive note, Coach's international growth strategy is starting to pay off. For its second quarter, global sales increased 12% with particular strength coming from China. Revenue from China was up 40% in the quarter, while comps out of China grew at a double-digit rate. Coach said it now expects to generate at least $400 million in sales this year in China alone.

As of this writing, the stock was trading around $51, with shares down more than 8% year to date. For comparison, let's see how rival lifestyle brands have performed thus far in 2013. 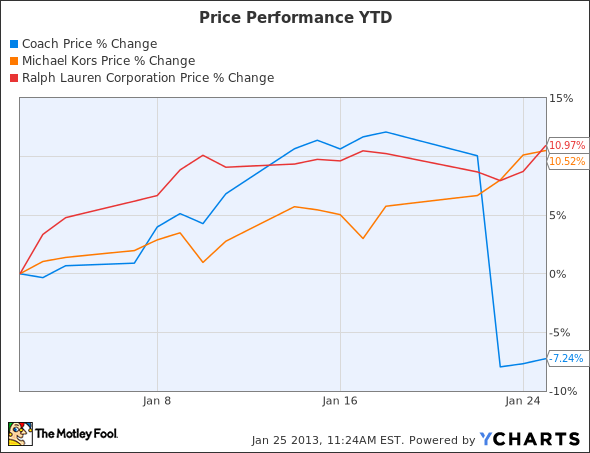 As you can see, Coach is markedly underperforming its peers in terms of price performance. But with shares trading at just 14 times earnings, the recent sell-off could create a favorable entry point for patient investors. I say this with an emphasis on patience. It will take both time and money for Coach to rebrand itself as an authentic lifestyle brand.

While the company's new direction comes with risks, it's also rife with opportunity. True, Coach may not borrow its name from an iconic designer like Michael Kors, but it's also not a stranger to the lifestyle brand. Coach already sells footwear, watches, and jewelry. By focusing less on its core handbag business and more on the extension of these categories, Coach may be able to win back some market share from Michael Kors.

Investors who currently own shares of Coach should sit tight as we wait to see how well the brand resonates with consumers as a lifestyle brand.