In that spirit, we three Fools have banded together to find the market's best and worst stocks, which we'll rate on The Motley Fool's CAPS system as outperformers or underperformers. We'll be accountable for every pick based on the sum of our knowledge and the balance of our decisions. Today, we'll be discussing Microsoft (NASDAQ:MSFT), the world's largest software company.

Microsoft by the numbers
Here's a quick snapshot of the company's most important numbers:

Alex's take
When we talk about Microsoft, half the time it's to make an unflattering comparison to Apple, which was left for dead during the dot-com era only to destroy all expectations as the rest of the tech world settled for second best. It's true that Microsoft is no longer a larger company than Apple on a market cap, revenue, or net income basis. It's also true that Microsoft is a much larger company than it was at its peak. In 1999, Microsoft's P/E topped out over 80. Today, on a normalized basis (discounting the impact of a massive impairment charge earlier this year, which you can see reflected in the online services division's steep trailing-12-month loss), Microsoft trades at a 10.8 P/E, which is a level it's dawdled near or dipped under several times in the past five years.

Microsoft continues to grow even in the face of a long-stagnant share price. In fact, its trailing-12-month revenue is roughly three times the revenue of its 2001 fiscal year. Two of its segments have posted dramatic growth during that time frame, which I've graphed here: 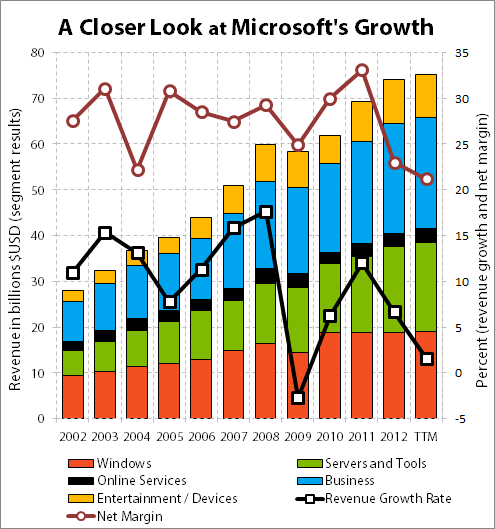 Microsoft's Windows division has been growing, but it hasn't been growing as quickly as either the servers and tool segment or the business segment, which comprises the Office suite and a number of related productivity tools, some of which are delivered through the cloud. Servers and tools has capitalized heavily on the shift to cloud computing to a far greater degree than has Amazon.com, despite the breathless media coverage devoted to Amazon Web Services. Amazon includes AWS in its "other" segment, which earned only an eighth as much in total in its most recent quarter as did Microsoft's servers and tools.

However, the problem is that Microsoft on the whole simply hasn't been growing as fast as many of its peers. Here's a table with the year-over-year revenue growth rates of several key competitors compared to Microsoft:

Source: Morningstar. *Not all companies reported FY 2012 results; omitted if not available.

Microsoft underperformed every other company except IBM in every single year for which we have data available, except for Oracle's latest two periods. Since all of these companies (except Amazon) have similar or superior profit margins, it really doesn't reflect well on Microsoft to be trailing them for this long.

If the PC is really on the down slope of its inevitable death spiral, then replacing Windows PC installations with mobile installations will just keep the division at similar levels in the future -- assuming that Microsoft can penetrate a well-developed mobile ecosystem. The business segment and the servers segment are both likely to come under increased pressure from Google on one side and Amazon and Oracle on the other, driving down margins.

Will Microsoft keep growing? I believe so. Will it grow strongly enough to beat the indexes against which we'll be measuring its performance? Based on declining revenue growth rates and faster-growing competition, it's difficult to see how.

Sean's take
Say what you will about the Microsoft vs. Apple comparisons, but the two are actually a lot more alike than they are different. I know what you're probably thinking: "But, who wants to be like Apple right now?" To that I'd answer: "Microsoft does!"

Let me start off by saying that Apple's growth model isn't broken -- our perception of reality is what's faulty. Apple is still growing iPhone and iPad sales by double-digits and it's a cash flow juggernaut. Microsoft may not offer the same growth rate, but it's walking down a very similar path as Apple.

One of Microsoft's greatest successes has been in mimicking its largest rival. Microsoft has plans to open as many as 75 total retail stores by 2014, a clear sign that it understands that consumers need to be able to touch a product and interact with the brand before they'll buy.

It's also been hard at work developing what it expects to be the next great tablet in the Surface. The tablet market is highly crowded, but, barring a supply issue like the one it experienced during Christmas, it should be able to use its brick-and-mortar presence to take its slice of the tablet market share. The Surface could be the jumping-off point that transforms on-the-border consumers back into Microsoft faithful, just as the iPhone was a transformational piece of technology for Apple.

Microsoft's leadership is also structured very similarly to Apple's. Steve Ballmer's compensation package was worth just $1.3 million last year. Apple's former CEO Steve Jobs regularly took home $1 annually, while current CEO Tim Cook decided to completely forgo dividend payments on restricted stock that will mature over time. What these leaders all have in common is a large position in the companies they run. Ballmer's 333 million shares of Microsoft align his interests with shareholders. If he wants a raise, he can simply raise the dividend.

Windows 8 has been a sore point thus far, with sales limping out of the gate, but Microsoft's position as the dominant operating system remains intact. Alex has done a good job of analyzing the empirical figures above, but I don't think that takes into full consideration how much cash flow Microsoft will produce over the next decade from its software division (even if we push predominantly into mobile devices) or given enough credit to Microsoft's attempts to adapt by mimicking its closest rival.

I'd always love to get Microsoft for a cheaper price than where it's at now. However, all things considered, Microsoft pays out a 3.3% yield (one which I suspect will head significantly higher this year), trades at less than nine times forward earnings, and will produce north of $25 billion in free cash flow each year with $54 billion already in the bank. I'd call that a very cheap and attractive buy.

Travis' take
Let's start with an understanding of what Microsoft is and what it isn't. It is the dominant PC operating system and the dominant office productivity tool. What it isn't is a growth company or a major player in future growth markets like smartphones and tablets -- at least not yet.

Windows for the PC will have a slow but profitable decline for Microsoft, but I can't yet see a world where we don't need the operating system at all. There's something about sitting down at a computer with a keyboard and a mouse that I think will take a long time to replace for many people. Are we really going to write off the PC in a year that IDC expects 384 million to be sold? Even the Google Chromebook can't replace Windows for most users. Windows is in decline, but we're putting the cart before the horse by predicting the complete demise of the PC.

For now, we're starting to see the lines blur between tablets and PCs, something that is probably inevitable. But this is where I think Microsoft is able to regain relevance. Say I'm a sales rep who travels often and uses a tablet for 80% of my work, but I still need the spreadsheet and word-processing power of a PC 20% of the time. Who do I go to? Not Google, and not to the iPad, I have to go to a Windows device. It's the only operating system that allows for the functionality of a tablet and the comfort and usability of a PC.

There have been reports from every corner of the tech world about how disappointing Windows 8 is, but I think we're just at the beginning of the adoption curve with a whole new line of products.

As for Microsoft's other products: as Alex pointed out, the business segment is healthy, servers and tools is healthy, but entertainment/devices is kind of a wash to me.

Microsoft isn't an exciting stock, but with 29% of its market cap in cash and a forward P/E ratio of 8.6, I'm perfectly comfortable taking the dividend and hoping for the best with Windows. I see little downside risk when I look at this stock, because of the balance sheet and an impenetrable market that still has a lot of upside potential if Windows 8 gains share in mobile. I'd be even more bullish on Microsoft if old-guard leaders like Steve Ballmer gave up the reins, but I think the company would have to be in a real crisis for that to happen.

In the end, I'll give an unenthusiastic thumbs-up on the stock simply on valuation and what I consider very strong positions in some slowly deteriorating markets with significant upside potential.

The final call
It looks like one enthusiastic outperform call and one shrug-of-the-shoulders thumbs up will outweigh Alex's decision to sit on the sidelines today. We'll be placing an outperform rating on Microsoft in our TMFYoungGuns CAPS portfolio, which is beating the S&P by 235 points since inception last spring.