The flu season started early this year, and though the worst of it may have peaked, cases continue to be reported to the Centers for Disease Control and Prevention at elevated levels. 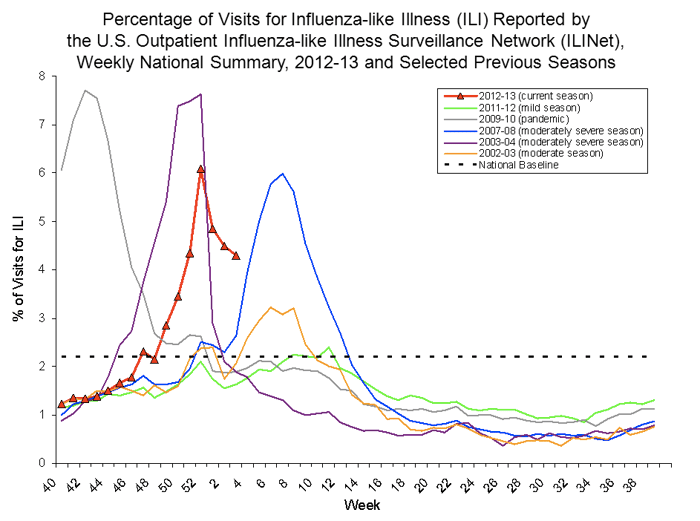 We'll often say we've got a touch of the flu when we're sick and not think much of it otherwise, but influenza is a deadly illness that kills 24,000 people annually. We're about halfway through the current season, and if search hits are any indication, it hasn't really relented yet. According to Google's Flu Trends -- which was developed in 2009 in collaboration with the CDC and aggregates search data looking for flu-related searches -- much of the country is still in the grips of an "intense" outbreak.

Other sources are tracking Twitter and Facebook to correlate mentions people make on their statuses that can give a more current situation report since the CDC data tends to lag by two weeks or so.

Take two and call me in the morning
All of which means it may be a perfect time to invest in drugstore chains!

The CDC recommends getting a flu shot as your best protection against contracting the illness, and CVS Caremark (NYSE:CVS) says demand for them is at unprecedented levels this year, even running out in some cases. Rite-Aid (NYSE:RAD) also reports running short of vaccinations, as 40% of the population has taken the agency's advice and gotten their flu shot.

Vaccine makers produced 135 million doses of the flu vaccine this year and distributed more than 128 million by the start of 2013, which is why GlaxoSmithKline (NYSE:GSK) says although there may be pockets of low supply, there shouldn't be any real national shortage. AstraZeneca's MedImmune would agree, noting it has 300,000 extra doses waiting to be shipped if needs be, but reports no requests for them have come in. The pharma also says there's more than enough of its nasally inhaled FluMist vaccine ready to go, too.

Not everyone is in the same boat because Roche says its Tamiflu for children is in short supply, and Sanofi, the largest maker of flu vaccines, reports its Fluzone has sold out of four of the six different dosages it makes.

Wagging the dog
The intensity of the flu outbreak could be a boon to pharmacy chain Walgreen (NASDAQ:WBA), which has suffered from falling prescription sales in the wake of its fight with pharmacy benefits manager Express Scripts (NASDAQ:ESRX). Net sales for the November quarter fell 4.6% primarily because it didn't participate in the Express Scripts network all year long, with prescription sales accounting for almost two-thirds of its revenues.

The chain has been pushing a new health and wellness program to turnaround its faltering sales channel, and is introducing a new pharmacy counter concept that actually puts the pharmacist on the go within the store, carrying around a tablet and making him or her more accessible to customers. It's sold 5.7 million flu shots so far this season, up from 5.3 million a year ago, and this could be just the thing to lure customers back.

CVS has been a prime beneficiary of the split between its rival and the PBM as customers flocked to it and to Rite-Aid to get their prescriptions filled. CVS was always confident it would be able to keep at least half of the customers it gained, but if one pharmacy has a flu shot where another does not, it could be enough to get them to return again in the future.

One cold season does not a trend make
Of course, a short-term bounce in sales from flu shots won't be a sustainable model. Even with the flu season raging in December, Walgreen reported a 4% decline in monthly sales as customer traffic fell by a like amount, and Rite-Aid's comps were down 2.2% as well. CVS stopped reporting monthly sales back in 2008 but in December -- no doubt seeing how sales were trending -- said it was looking for better than 17% earnings growth this year and was raising its dividend 38%.

At 17 times earnings and 13 times estimates, I think CVS Caremark might be the best bet of the three to capitalize on this flu outbreak, but let me know in the comments box below if you think all three pharmacy chains look sickly or if one's better than another to keep your portfolio from feeling under the weather.