Most companies with market caps over $30 billion are household names. Japan's factory automation king Fanuc (OTC:FANUY) is one of the exceptions, and part of that is by choice, as Fanuc has a reputation for being extremely secretive and protective of its technology.

Fanuc has gained some additional notoriety in the last couple of years as the company behind the machines turning aluminum into iPhone housings for Apple.

But what matters more to Fanuc and investors are Apple's moves to automate more of the manufacturing behind its products. The more I look, the more automation I see coming, and I plan to capture some of this trend through an investment in Fanuc. 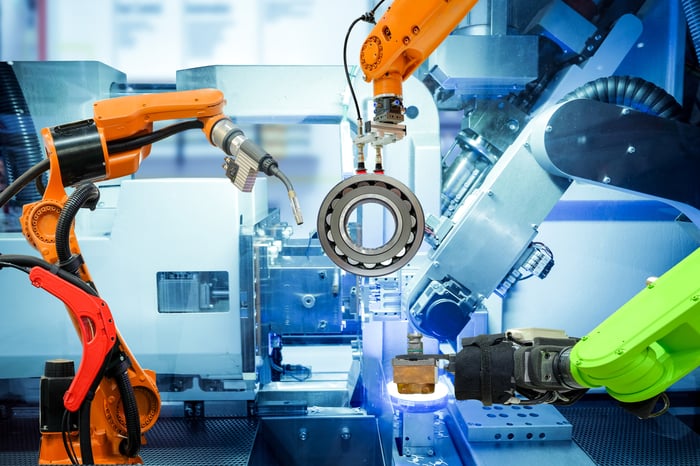 Much more than smartphones

What Fanuc lacks in notoriety it more than makes up for in efficiency and consistent profitability. Outside of a one-year blip during the financial crisis, Fanuc has consistently had operating margins north of 35% and generally closer to 40%.

Headquartered at the foot of Mount Fuji, Fanuc is a leading supplier of robotics and computer numerical controls used in automobile, electronics, and other manufacturing industries. I see these industries buying more Fanuc robotics and automation controls, but automobile manufacturers in particular should have a growing demand for Fanuc's products in the next few years. Part of this will be driven by U.S. carmakers, for GM and Ford have much healthier balance sheets than they did going into the financial crisis and are in a position to invest in their facilities on a consistent basis.

Additional growth should also come from emerging market. Chinese automakers such as Great Wall are automating manufacturing to catch up with VW and other global automakers' productivity and quality. The big guys aren't standing still either, though as VW, Ford, and others are also making big investments in China.

It doesn't stop there. Japanese manufacturers, which are arguably the most automated in the world are taking automation a step further. This is partly driven by Japan's aging society and also by companies bringing manufacturing back home from China to keep technologies and manufacturing know-how at home. One of the largest examples of this is Canon's (NYSE:CAJ) plan to fully automate all of its camera manufacturing in Japan to boost returns.

China may have reached a turning point
Automating car manufacturing in China might just be the tip of the iceberg for Fanuc and the automation industry. There is some argument among economists, but China might have reached what is known as the Lewis turning point. In layman's terms, it is the point when adding workers to manufacturing no longer creates economic gains and instead leads to inflation because the supply of cheap labor has been exhausted.

The first signs of this were manufacturing moving from China to Vietnam and other low-cost countries in the last few years. That may continue, but what's clear is that labor costs are rising in China. I happen to believe that China will start to automate just as the U.S., Europe, Japan, and South Korea did in the past and employees move into jobs in services. It will be a bumpy ride as companies and employees make the transition, but it should mean growing demand for Fanuc's products along the way.

China + Japan = complicated
As a leader in the robotics and CNC fields I have little doubt that Fanuc will benefit from these trends, but I do question the timing. At the moment China and Japan remain in a heated dispute over the Japanese adminsitered Senkaku (Diaoyu in Chinese) islands. This has hurt the sales of Japanese products in China and, I believe, hurt Fanuc's sales of late. Despite the recent escalations from both sides, I happen to believe that cooler heads will prevail, because Japan needs China as a trade partner and China needs Japan's foreign investment in its economy, too.

There is a general cyclicality to the sales of automation products, too. I continue to think demand will grow in the long term, but it won't be a steady climb with increasing sales each year. There will be some sales declines on occasion, and I hope to use those opportunities to add more shares in Fanuc or other companies in the automation space.

Foolish final thoughts
Working in Fanuc's favor is the recent weakness in the yen brought about by recently reelected Shinzo Abe and LDP party's plan to stimulate the economy and create inflation. A weaker yen will help Fanuc sales, but this purchase is about Fanuc's leadership position in its industry and consistent profitability. I'll let the governments and central banks worry about the currency movements for now and focus on Fanuc and how it's executing on its growth plans.

As a reminder, you can follow along with all my real-money Orange Portfolio trades and updates here.