Procter & Gamble's (NYSE:PG) second-quarter earnings have enabled its shares to break free of recent gravity. Since reporting on Jan. 25, P&G has watched its stock price appreciate nearly 7.5%. Because core earnings increased 12% versus the prior year, and also because of management's confident increase in earnings guidance, advocates are sleeping peacefully again without the help of P&G's new ZzzQuil sleep aid. Shareholders may be well advised to limit the slumber to a power nap, however: The single quarter hasn't erased some near-term issues that may affect the company in 2013.

P&G has lost some of its dynamism in recent years. Since coming off a record year of revenue and net income in 2008, the company has delivered unimpressive revenue growth, first declining in 2009, and subsequently clawing back at an average rate of 2.3% growth per year from fiscal 2010 through 2012. Moreover, net income has deteriorated: At $10.5 billion in 2012 on $83.7 billion in sales, the bottom line is roughly 13% lower than the 2008 peak. While the storied giant plodded along, its consumer-goods peers were rewarded for their higher growth rates: 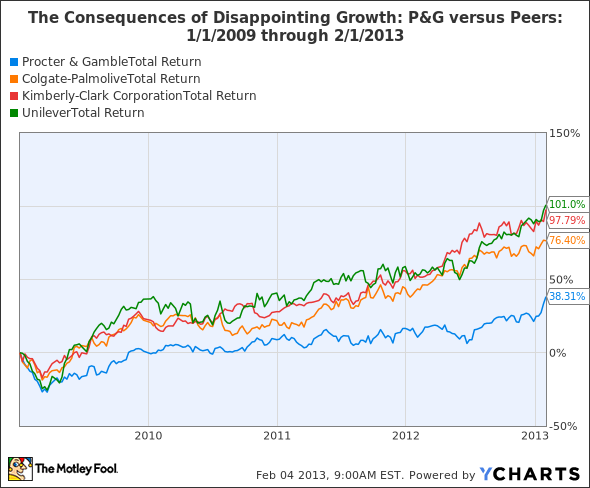 During the past four fiscal years, Kimberly-Clark (NYSE:KMB) and Colgate-Palmolive (NYSE:CL) have averaged 2.5% and 2.9% revenue growth, respectively. Kimberly-Clark's annual revenue is $21 billion, and Colgate books annual revenue of $17 billion, so they are each a quarter of P&G's size and should be expected to grow their top lines more quickly than P&G. However, Unilever (NYSE:UL), of comparable size to P&G at annual sales of 51 billion euros, has dusted all three companies recently, averaging 6.9% annual revenue growth over the same period.

Better margins: We've been here before
P&G won't grow its sales like Unilever anytime soon, but it does enjoy a higher gross margin. One of the drivers of new-found optimism surrounding P&G is its margin improvement, resulting from productivity enhancements and cost-cutting. Core gross margin increased more than 1 percentage point in the most recent quarter versus the prior year, from 50.1% to 51.2%. While this is a vigorous improvement, it's still below the gross margin P&G enjoyed in 2010, when the comparable margin stood at 51.8%. So in some ways P&G is being rewarded for getting back to the status quo.

Strong cash flow yet scant resources?
One area P&G might want to restore to the status quo is its resources on hand. When the company acquired Gillette in 2005, it added $64.5 billion of goodwill and intangible assets to its balance sheet. As a result, tangible net book value in the year of acquisition fell to negative $26 billion. In funding the transaction, the company's total liabilities also mushroomed, from $43 billion to $79 billion. As the following chart reveals, P&G has done little to amend either of these conditions: 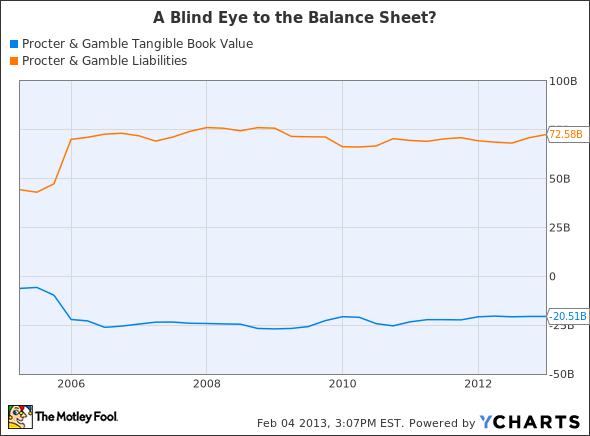 Between fiscal year 2006 and 2012, P&G generated $97.46 billion of cash from operations. But the balance sheet actually shrank by $3.5 billion over this time span, and embarrassingly for a company perceived to be so solid, P&G hasn't recorded a quarter with a positive current ratio in more than six years. If the company hasn't paid down its debt, and has neglected to significantly improve its cash balances or net fixed assets (either action would reduce the negative tangible book value), where has all its excess cash gone? Why, in your pocket, shareholder! From the 2006 fiscal year, when P&G swallowed Gillette whole, to the end of its last fiscal year, P&G has paid out $35 billion in dividends and repurchased a cool $56 billion worth of shares.

Why P&G may be adrift
I believe Procter & Gamble's neglect of its balance sheet and over-attendance to returning cash to shareholders is a result of its unambitious business model. Let's examine P&G's financial goals, as stated in the company's 2012 annual report:

These goals, when taken together, create a predictable performance pattern from which it is difficult to break free. If it tracks only a percent or two above market growth, (increasing annual sales 3% to 4% per company guidance), P&G will be forced to continue its cost-cutting to deliver high-single-digit earnings per share. It also must sacrifice that high free cash flow productivity of 90% to buy back shares on the open market, which helps deliver the target EPS. Is this uninspired financial strategy worth the trouble? According to the peer comparison chart above, the market seems to have punished P&G until very recently versus its competition for its formulaic, risk-averse approach to running its business.

Breakthrough potential
There is a counter-narrative to the reality of P&G's current situation, and that story resides in the company's product pipeline. The consumer-goods titan is widely recognized as one of the world's most innovative corporations. For some years now, management has been promising to unleash "discontinuous innovation" to improve its sales and margins. P&G describes discontinuous innovation as "innovation that obsoletes current products and creates new categories and new brands."

Despite the fancy nomenclature, recent innovation hasn't really been "discontinuous." Rather, it has centered on the basic extension of P&G's market share. Tide Pods, introduced in 2012, are on their way to $500 million in 2013 sales. While there are indeed many groundbreaking characteristics of this product (such as the pods' ability to dissolve completely even in a cold-water wash), its actual purpose is to extend market share of Tide, one of the company's $25 billion brands. In the same vein,  the category-leading ZzzQuil is simply a common antihistamine most of us know as Benadryl, repackaged as a sleep aid.

Discontinuous or not, as Fool contributor Demitrios Kalogeropoulos points out, some of these innovations may bear fruit in the second half of 2013. Several product wins of the magnitude of Tide Pods or ZzzQuil could propel P&G out of its cycle of mediocre results.

Wait for a trend to develop
If you're not currently invested in Procter & Gamble, it may be prudent to wait out the next couple of quarters to see if the top-line and margin growth can continue, and if the company can gain true momentum from innovations in its product pipeline. Beyond the reality that one quarter does not make a trend, P&G also needs to take care of its fiscal house to prove that it is not adrift, but on track.