The results are in for Nuance Communications (NASDAQ:NUAN), and boy, does the market hate them. The company is down 19% today after reporting a sequential decline in revenue and a steep drop in net income. Three analysts -- at Needham, Craig-Hallum, and Stifel Nicoulas -- have all downgraded Nuance in the wake of its earnings miss and soft guidance. Does that mean it's time to run for the hills? Perhaps not. Let's dig deeper to find out what went wrong today, and whether this weakness is real, or if Wall Street is just hearing voices in its head today.

What the numbers tell you
The chart below contains GAAP numbers throughout, but on an adjusted basis, Nuance looks a bit better this quarter. In its fiscal first quarter, Nuance posted non-GAAP revenue of $492.4 million and adjusted earnings per share of $0.35. The discrepancy between its GAAP revenue of $462.3 million and the adjusted result is due to the accounting treatment of acquisitions. Despite that difference, Nuance easily surpassed its year-ago result. A steep GAAP net income loss translates to a $113 million positive result on an adjusted basis, a slight decrease from last quarter's GAAP result of $118 million, and in line with the growth in free cash flow from the year-ago quarter: 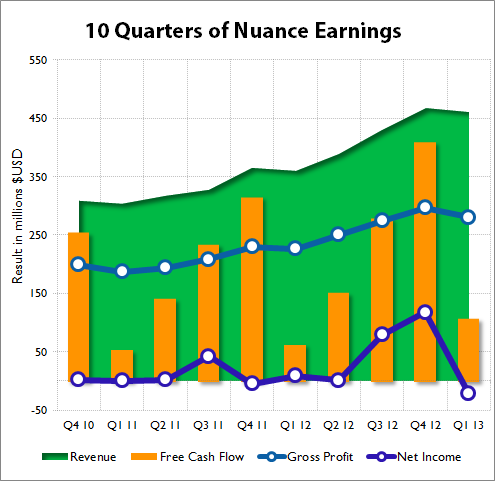 What does it mean for the future?
Nuance breaks out its segments as follows:

It's clear that health care is both Nuance's biggest moneymaker and its fastest-growing segment. There may be a ceiling on how much more Nuance can grow its mobile and consumer segment, since the company already counts both Apple (NASDAQ:AAPL) and Samsung as customers. Speech recognition for consumers is becoming an increasingly crowded field, and despite Nuance's leadership position, it could still find itself undermined by lower-cost alternatives such as AT&T's (NYSE:T) Watson platform, which is open to developers and could enjoy the sort of crowdsourced innovation Nuance's closed system lacks. There is still a great deal of upside in medical applications, however, as many hospitals have been slow to adopt the latest technology. Perhaps Nuance could partner with iRobot (NASDAQ:IRBT), which is in the process of rolling out its new medical robot to hospitals around the world. The last thing you'd want is a semi-autonomous robot misunderstanding you in a place full of injured and sickly people.

The problem analysts have with Nuance's report is its guidance. For the in-progress second fiscal quarter, Nuance is looking at $500 million to $553 million in revenue and $0.35 to $0.45 per share in adjusted earnings, which bests analyst expectations of $524 million in revenue, but falls a bit short of the Street's $0.44 EPS projections. Nuance also anticipates adjusted revenue in the $2.15 billion to $2.20 billion range for the full year, with $1.76 to $1.87 per share in adjusted earnings. Both numbers are disappointing in light of the $2.2 billion top line and $1.89 in EPS analysts sought, but we should unpack that to get a clearer picture of what it really means.

At the mid-range of each figure -- $527 million for the second quarter and $2.18 billion for the full year -- Nuance would be posting year-over-year growth of 35% for the quarter and 32% for the full year. The problem lies in the company's earnings guidance. At a midpoint of $1.82 per share, Nuance expects only 5% growth in earnings over fiscal 2012's adjusted EPS of $1.73. At the high end, it's still only 8% growth, indicating margin contraction for the year ahead.

Nuance might surprise us all yet. Keep in mind that after its big drop, its stock has a price-to-free-cash-flow ratio of 13.8. That's hardly expensive, and even if free cash flow growth slows along with net income, there's still a good deal of upside to this somewhat misunderstood stock. It will depend largely on how effectively Nuance can generate further interest in its services from the medical field.