The problem with the report is that while it offers confirmation that Apple is exploring a wristwatch-like device from the much-quoted "people familiar with the situation," it's short on details about how such a device would function. Instead, most of the attention is placed on the Apple supplier whose breakthrough technology could be the enabler behind Apple's efforts. Let's look at Apple supplier Corning's (NYSE:GLW) new technology, and what it could mean for both the company and Apple itself.

A new wave in glass technology
Corning is a conglomerate, but it has seen most of its profits shift to its LCD glass division. The company's name might be familiar to Apple investors thanks to one major product: Gorilla Glass, a thin cover glass whose specialty is damage resistance. It has been widely adopted across the entire mobile industry, including by Apple.

Gorilla Glass has been a breakthrough product for Corning. In the company's third-quarter conference call, Corning revealed that more than 1 billion devices have been shipped with the glass across 500 different products.

Many investors saw the success of Gorilla Glass and used it as a reason to invest in Corning. On the surface, that's a reasonable investment thesis. There were 700 million smartphones shipped last year, and tablet growth is starting to explode. It'll move from about 120 million units last year toward an expected 280 million-plus over the next four years. Corning holds a central placement as a killer technology in mobile devices. As mobile grows, it would seem Corning's future is destined to grow along with it.

Yet the problem is that glass technology pricing is driven by volume, and smartphones and tablets have significantly less screen volume than other devices like televisions. A 4-inch smartphone screen isn't one-tenth the size of a 40-inch TV screen. TV measurements are marketed by their diagonal width, which obscures the difference in screen volume a few diagonal inches can add. For example, a 40-inch television has 9,900% more screen volume than a 4-inch smartphone. Its screen area is about 684 inches (about 35-by-20), while an iPhone 5's area is closer to 7 inches (about 3.5-by-2).

The end result is that while Corning is seeing blockbuster success in Gorilla Glass, it still contributed only about $1 billion in sales for the company, or 12% of total revenue, last year.

More innovation, more profits?
However, there is a key overarching idea to Gorilla Glass. Corning is dependent on televisions and the huge glass volume in them, but so much growth in technology spending is in small mobile devices with less screen space. The company has attempted to solve this problem by using innovation to still take advantage of the mobile market. If it can come up with advanced technologies where it's collecting more revenue on lower total glass volume, it could find success in mobile.

Beyond Gorilla Glass we find another advanced glass technology that Corning has created with the mobile market in mind: Willow Glass. The defining feature of Willow Glass is that it's extremely flexible. 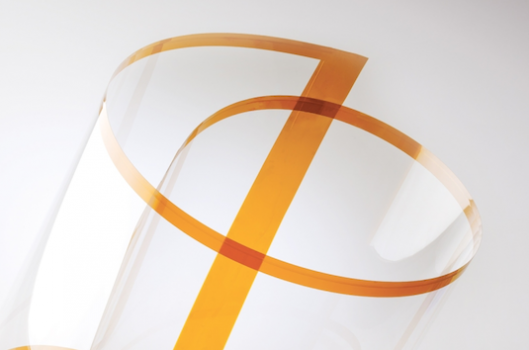 The main appeal most tech observers have focused in on with Willow Glass is using its thinness and flexibility in "novel" ways on devices such as smartphones and tablets. However, the New York Times report focuses on Apple as using the glass as a solution to wearable computing:

"Such a watch would operate Apple's iOS platform, two people said, and stand apart from competitors based on the company's understanding of how such glass can curve around the human body."

The report goes on to flesh out Corning's Willow Glass as the technology allowing the development of Apple's watch-like device. While there are competing flexible glass covers, Corning has begun creating the capacity to roll out enough Willow Glass production that devices based on the technology can start hitting the market at the beginning of 2014.

As we've seen from recent supply constraint issues with the iPhone 5 and iPad Mini, a prerequisite for Apple to use a new technology is to make sure suppliers have enough capacity to fulfill the massive demand for its new products.

Even more growth opportunities ahead
The important point to make with reports of any new Apple product is that they might never see the light of day. Apple tests a variety of products, and not all of them hit the store shelves. In recent years we've seen reports that Apple TVs and larger iPhones were being tested, but none has made it past the conceptual level.

Yet what's fascinating is that all of these reports feed into Apple's continued exploration of a larger trend: Extend iOS into new devices that all reinforce each other. A wearable computer using iOS would logically be heavily integrated with both iPhones and iPads. Apple's fascination with wearable computing stems from existing devices that are at the vanguard of this trend. As the New York Times article notes, Tim Cook has been spotted wearing Nike's fuel-band device, which tracks fitness levels.

As the owner of iOS, Apple could extend the integration between wearable computing and smartphones and tablets much further than the likes of Nike could today.

Beyond wearable computing, the trend further extends into the living room. A television running iOS would be a massive leap forward from today's clunky television user interfaces. Not only that, but iOS, through iTunes, has become the leading media platform. An Apple television as a fixed complement to all of Apple's mobile opportunities-- iPods, iPads, iPhones, and future wearable computing -- makes too much sense to never happen.

If Apple does create an iTV, in one fell swoop it could help solve the problem that caused Corning to push so hard into Gorilla and Willow Glass in the first place: It could restart stagnant TV sales.

Televisions are projected to see either flat or negative growth across the next couple of years. 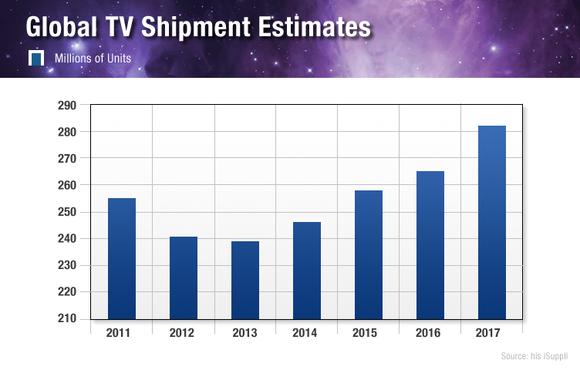 The problem is that consumers are content with their current televisions. Better "specs" on televisions aren't enough to encourage an upgrade cycle, and today's smart TVs are woefully underused because they're sluggish and their user interfaces are terrible. Instead of buying a new TV, consumers are spending that money on new tablets or smartphones.

However, a television connected to a broader ecosystem would offer something foundationally different from what's on the market today. It would begin a new TV refresh cycle. With Corning's existing relationships with Apple, there's a good chance it could provide glass substrates for an Apple TV. But the larger point is, as competitors rushed to catch up with Apple, it'd see outsized gains as glass prices for television stabilized and demand increased.

The most fascinating Apple supplier?
Corning provides a fascinating play on Apple. While it's a supplier today thanks to Gorilla Glass, the net effects of mobile are hurting its business as mobile spending has shifted demand from televisions. Yet it might be the most advantaged supplier in the two areas that could define Apple's future growth opportunities: wearable computing and television. With the stock at less than 11 times earnings, I've personally decided that the reward to Corning if Apple decides to pursue these products outweighs the risks if it doesn't.

In any case, the future of Corning and Apple's next wave of products suddenly seem intertwined. The next decade of technology advancements is beginning to take shape.