It's a never-ending cycle for energy companies. For every barrel of oil that's produced, the company needs to go out and find new reserves so that its profit well never runs dry. It's not always easy, so when you find a company that is growing both production and reserves, you've got something special on your hands.

Continental shift
Thanks to the amazing growth in the Bakken shale, Continental Resources (NYSE:CLR) is one of those special companies. It has enjoyed an astounding 58% year-over-year growth in production to an average of 106,831 barrels of oil equivalent per day by the end of the fourth quarter. That growth has enabled Continental to become the leading producer in the Bakken.

Continental's growth has really been supercharged since the second quarter of 2011. The company's Bakken production growth has outpaced close competitors EOG Resources (NYSE:EOG) and Whiting Petroleum (NYSE:WLL) and, as you can see in the following chart, Continental has moved to the head of its class: 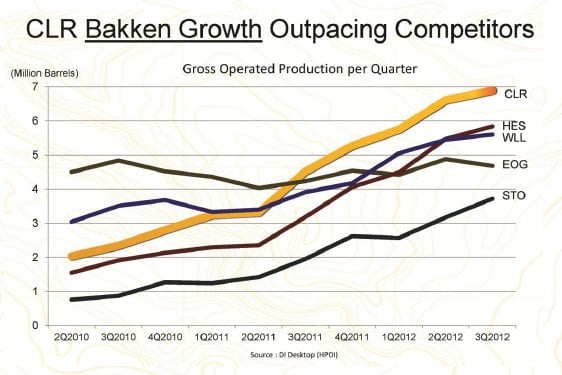 Continental Resources, as you can see, now stands as the No. 1 producer in the Bakken. To maintain that lead, it needs to have excess reserves in place that can be drilled economically. Continental continues to perform on this front, booking a 54% year-over-year growth in reserves to 785 million BOE (barrels of oil equivalent) in 2012. In fact, its proved reserves have grown by 45% compounded annually since 2009. At its growth current rate, it could reach a billion boe of proved reserves by the end of the year. That should help the company maintain its lead in the Bakken.

That being said, there is a lot of risk involved in being a one-trick pony. That's why it is also good to note that the company is becoming much more than just a Bakken story. Continental has been moving into the "SCOOP" or South Central Oklahoma Oil Province, which includes three of the top oil-producing counties in Oklahoma. It's a liquids-rich area and Continental has close to 200,000 acres in play, 20% of which is held by production. While that's nowhere near its 1.1 million acres in the Bakken, it enables it to diversify into another oil play.

When you add it all up, the company anticipates both production and reserves to grow threefold by 2017. For some perspective, major independent and Bakken producer ConocoPhillips (NYSE:COP)expects to grow its production by 3% to 5% annually while also slowly growing reserves. Continental is offering investors supercharged growth that few can match.

Running to catch up
Continental isn't the only company that's enjoying the success of the Bakken. On a smaller scale, investors could also consider the fast-growing Kodiak Oil & Gas (NYSE: KOG).  The company is expecting to double its production in 2013 alone from an average of 15 Mboe/d in 2012 to 29 Mbod/d to 31 Mboe/d in 2013. Kodiak also has a much smaller current proved reserve base of 70.1 million BOE as of the end of this past June.

While Kodiak has a long way to go to catch up with its industry peers, it is a dynamic growth story to watch. It has been quickly ramping up production and catching up to its Bakken peers. It's a company that, along with Continental, needs to be on your investing radar.

My Foolish take
Depending on your temperament and time frame, these fast growers might be right up your alley. Double-digit production and reserve growth are hard to come by. Just ask ConocoPhillips. However, before you dive in head first, just remember that growth does come with its own set of risks.