It wasn't a very good morning for OLED specialist Universal Display (NASDAQ:OLED). Shares were already underperforming the broader market when suddenly they tanked and were down nearly 7% at the low before recovering most of those losses. 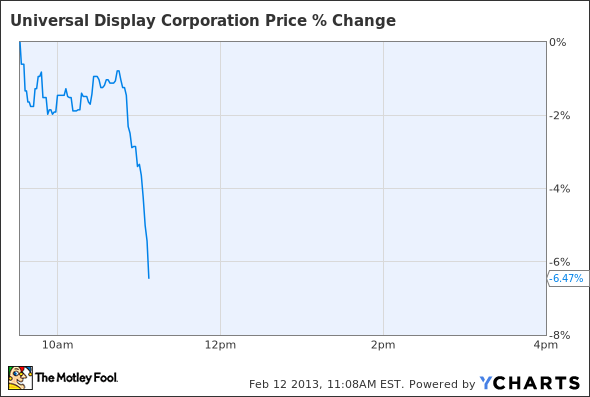 What was the cause behind the drop? It turns out that three sentences were all it took to knock down Universal Display.

Sticks and stones may break my bones, but Tim Cook just bashed OLED

I've long held the belief that Apple (NASDAQ:AAPL) would one day adopt OLED technology in its displays. The technology has benefits that are right in line with what Apple values: better power efficiency and the ability to facilitate thinner form factors. On top of that, Apple already has numerous patents filed related to OLED technology, so we know it continues to at least explore the idea.

One of the hurdles to such a move has always been supply constraints, since Apple has high volume needs. We can now add another couple of reasons why Apple has not adopted OLED displays, and may not anytime soon, if at all. Here are the three sentences that Tim Cook uttered regarding OLED displays during the Goldman Sachs Technology and Internet Conference this morning.

Cook's response was to a question regarding smartphone specifications and screen sizes, so him bringing up OLEDs out of the blue may have caught investors off guard. Of course, Apple's biggest rival is Samsung, who is Universal Display's largest customer and a major proponent of OLED displays. The South Korean company now frequently uses AMOLED displays in its high-end flagship products, including both the Galaxy S III and Galaxy Note II.

Instead, Apple has long been rumored to be exploring IGZO display technology, which is compatible with both traditional LCD displays as well as OLED displays. Sharp, one of Apple's display suppliers, prototyped both IGZO LCD panels and IGZO OLED panels last year. It seems that if Apple goes with IGZO some day soon, it'll likely be the LCD variety, much to the chagrin of Universal Display investors.