Unsurprisingly, Google (NASDAQ:GOOGL) Android continued its steady rise thanks to the availability of every imaginable combination of price, size, and overall quality. Android comprised a whopping 70.1% of the smartphone market in the fourth quarter. This figure was actually down sequentially from the 75% share it grabbed in the third quarter, which is primarily due to the launch of Apple's (NASDAQ:AAPL) iPhone 5 and subsequent price reductions on the older iPhone 4 and iPhone 4S.

IDC said that strong sales of those older iPhone models helped boost iOS market share, despite the Apple Maps debacle. That coincides with Tim Cook's statement on the last conference call that the iPhone 4 was heavily constrained during the quarter after its subsidized price was dropped to free on contract. 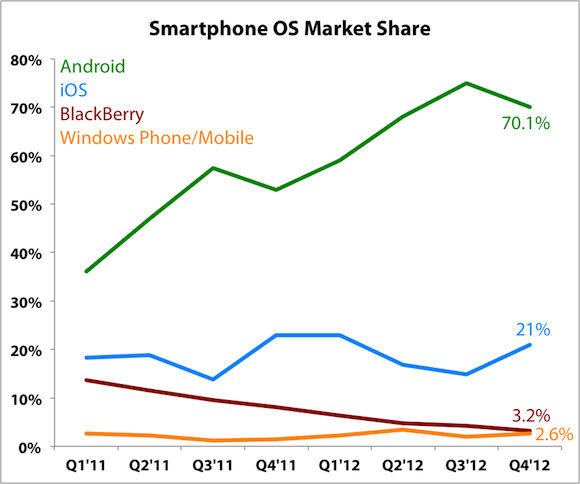 BlackBerry (NYSE:BB) continued to decline as its new BlackBerry 10 platform wouldn't launch until this quarter, and everything is riding on the new operating system, for better or for worse. BlackBerry CEO Thorsten Heins has no illusions about being able to topple the dominance of iOS and Android. In September, he specifically said that BlackBerry 10 will give the company a "clear shot at being the No. 3 platform on the market." BlackBerry indeed held on to its distant third-place finish with 3.2% of the market in the fourth quarter.

Meanwhile, Microsoft (NASDAQ:MSFT) is eyeing said No. 3 spot as it pushes Windows Phone 8 aggressively by growing its hardware partner base. It was able to grow Windows Phone shipments substantially over the prior year, but that's coming off a small base and we're talking about 6 million Windows Phone units. This increase is directly attributable to Nokia's (NYSE:NOK) recent success with Lumia shipments. IDC says that Nokia represented 76% of Windows Phone shipments, but that seems slightly off when you consider that Nokia disclosed 4.4 million Lumia unit shipments last quarter -- closer to 73% of all Windows Phone devices.

Microsoft's 2.6% share means it is neck-and-neck with BlackBerry for that bronze medal. That's also evidence that the No. 3 spot will be largely determined by which smartphone turnaround story plays out better: BlackBerry or Nokia. If BlackBerry 10 can gain traction, it may be able to hold onto the No. 3 trophy. But if Nokia is able to continue selling Lumias at a respectable clip, then those gains will do Microsoft plenty of favors.

Duopoly defined
Android and iOS hit a new combined high, gobbling up 91.1% of the market and leaving less and less for everyone else. This combined market share was up slightly sequentially, but significantly year-over-year. The rise of these two platforms as the dominant operating systems has been nothing short of breathtaking, so the opportunities available to the No. 3 platform (and everything below that) continue to shrink in general.

This is the very definition of a duopoly. 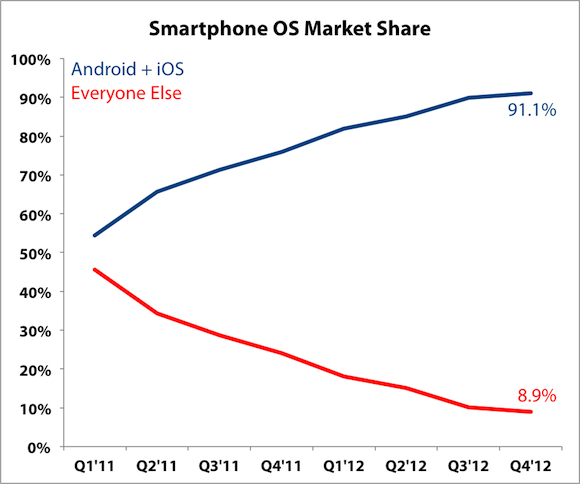 It's also worth remembering that Google isn't benefiting as much as investors might think from Android ubiquity, since the search giant has lost control of the platform due to its open-source nature. China is now the largest smartphone market in the world, meaning that Android popularity in that country is a large contributor to Android's broader gains. Specifically, Android does Google very little good in China since most of those devices are heavily forked and Chinese consumers tend to prefer local services like Baidu.

Still, at this point it seems that nothing can put an end to Android and iOS hegemony.