Midstream operator Boardwalk Pipeline Partners (NYSE:BWP) is out with its fourth-quarter earnings. The company met profit estimates of $0.38 a share but missed on revenue. The Street was hoping for revenue of $341.7 million and Boardwalk only delivered $325.7 million. The market didn't have much of a reaction to the news, with shares barely budging.

Acquisitions drove the quarter as the company's newly acquired Louisiana Midstream and HP storage assets drove $25.6 million in new revenue. The assets were part of the $900 million of acquisitions that Boardwalk completed in the last year. Without those contributions, revenue would have been down slightly as operating revenue only grew $24.7 million.

The culprit: Transportation contract renewals continue to come in at lower rates due to a change in market fundamentals from when the contract was first signed. Some of this contracted capacity is still waiting for projects on the other end to be completed. In the interim, that capacity is going out to the short-term market, which, let's just say, isn't that robust at the moment.

Don't expect much relief in 2013. Boardwalk has about $125 million in contract expiring this year and estimates that it will only be able to contract this capacity for $85 million in the year ahead. That looming $40 million reduction in the top line has the company looking to cut expenses and diversify into other areas of the midstream segment.

Looking ahead
Boardwalk has several growth projects going into service this year, including its Eagle Ford Expansion project, which will be coming online in April, and an expansion of its HP Storage cavern by the end of the first half. These organic growth projects and others in the pipeline will be important for the company to offset contract roll-offs. They're also important for Boardwalk's ability to raise its distribution.

As Energy Transfer investors know all too well, the partnership hasn't raised its payout in 19 straight quarters. Meanwhile, Enterprise has lifted its payout 34 consecutive quarters. Take a look at this five-year chart and you'll see why stagnant distributions are not a good sign for investors: 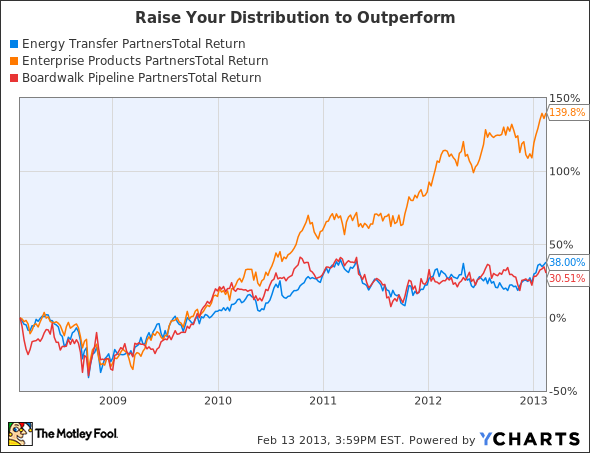 My Foolish take
Boardwalk had a rather blah quarter and there's not a whole lot of excitement on the horizon. The company is doing the best it can with the assets it owns, but right now that's simply not good enough. With so many midstream options for investors to choose from, you might want to allocate your investment dollars elsewhere.