Merck (NYSE:MRK) has to more heavily rely on top selling pharmaceuticals now that Singulair's off patent. Some of those drugs remain strong enough to carry the extra weight, but others struggle to stay afloat. Cholesterol drugs Zetia and Vytorin together accounted for 10% of Merck's pharma sales last year. But while Zetia managed to recover from a sales plunge, the duo's end is still in sight.

Big fall
Zetia and Vytorin were partnerships with Schering-Plough until Merck bought the company in 2009.

Zetia received FDA approval in 2002 and became the first significant competition for the statin class that held the cholesterol market for more than two decades. Statins such as Pfizer's (NYSE:PFE) best-selling Lipitor work by limiting the liver's production of cholesterol, while Zetia reducesthe intestine's absorption of cholesterol. Vytorin -- a combination of Zetia and Merck's own statin Zocor -- came to market in 2004.

In the early days, Zetia and Vytorin had sales trajectories that looked like they might one day near Lipitor's $13 billion in peak sales. But then 2008 happened. In January of that year, Merck released results to the ENHANCE study that compared Vytorin's efficacy to Zocor alone. There was no statistically significant difference in arterial plaque reduction.

The bad news accumulated. A panel of experts suggested that patients turn to Vytorin only as a last resort if statins aren't sufficient treatment. Then the nation's largest insurer doubled the patient price for Vytorin, since statins were cheaper and as effective.

Sales of Vytorin and Zetia dropped 15% and 9% in 2008 compared with the prior year. The slide down would continue for Vytorin, as Zetia managed the climb back up. 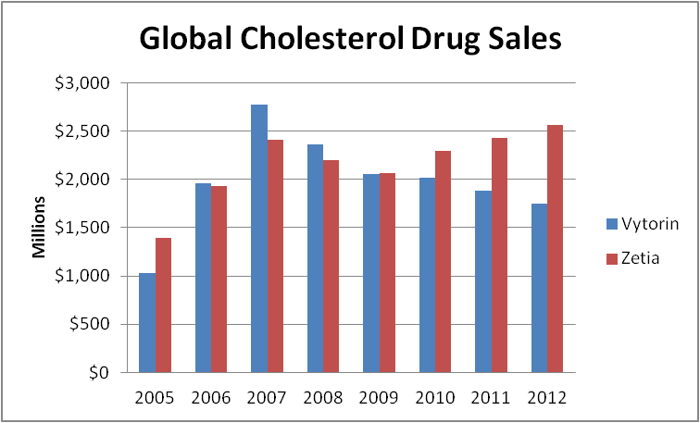 Climb back up ... to the patent cliff
Vytorin's damage was done, and ENHANCE continues to have an impact on business. Last week, Merck announced that it was paying $688 million to settle an investor lawsuit relating to that trial. The investors claimed Merck knew about Vytorin's efficacy issues a full year before releasing the results.

Merck has Vytorin in another trial tested against Zocor -- this time testing for the reduction of heart attacks and strokes. But those results won't report until next year, and generic competition looms around that corner. Merck recently won an appeals ruling that pushes Mylan's generic versions of Zetia and Vytorin back until 2017. Glenmark Pharmaceuticals had already won the right to start selling Zetia generics in December 2016.

Generics might have company in eroding Zetia's earnings. The rising class of PCSK9 inhibitors contains Amgen's (NASDAQ:AMGN) AMG 145, which reduced "bad" cholesterol levels 51% compared with Zetia's 15% reduction. Phase 3 data for that drug should report next year.

Merck has plans to combat these losses. But they aren't going well.

New drug faltering
Last month, Merck asked doctors in Europe to stop prescribing Tredaptive because of efficacy and safety issues. The company had planned to file for U.S. approval this year.

In 2009, the FDA turned the drug away with a refuse to file -- essentially a complete response letter done before the review, rather than after. But the resubmission last year was also turned down because of lack of data. Merck turned around, collected more info, and resubmitted again. That decision should come in the first half of this year.

The glaring problem is the lack of available outcome data for this new combo. And that data won't report until after the FDA decision. With the company's cholesterol record, the lack of data isn't reassuring

Foolish final thoughts
It's not a good time to be a Merck cholesterol treatment. Vytorin continues to carry the cloud of the ENHANCE results and won't have the chance for potential redemption until Zetia's nearly off patent. The backup projects need backups.

Merck has enough drugs that no one drug could cripple the company. But a shaky pipeline and a few top products with issues don't make for a healthy picture.