After a good start to the week, stocks were taken down on Wednesday, with the S&P 500 (SNPINDEX:^GSPC) losing 1.2%, while the narrower, price-weighted Dow Jones Industrial Average (DJINDICES:^DJI) lost 0.8%.

Reflecting those losses, the VIX (VOLATILITYINDICES:^VIX), Wall Street's fear gauge, shot up 19% to close at 14.68 -- its highest closing value since Jan. 2, when the index was still subsiding after a fiscal cliff-related spike. (The VIX is calculated from S&P 500 option prices and reflects investor expectations for stock market volatility over the coming 30 days.)

Boeing: Expect further delays
In the wake of the Dreamliner crisis, shares of aircraft manufacturer and Dow component Boeing (NYSE:BA) have, understandably, lagged the broad market. The following graph shows Boeing's stock performance relative to that of the S&P 500, starting last Nov. 15, the date on which the index hit its second-half low before embarking on its current rally: 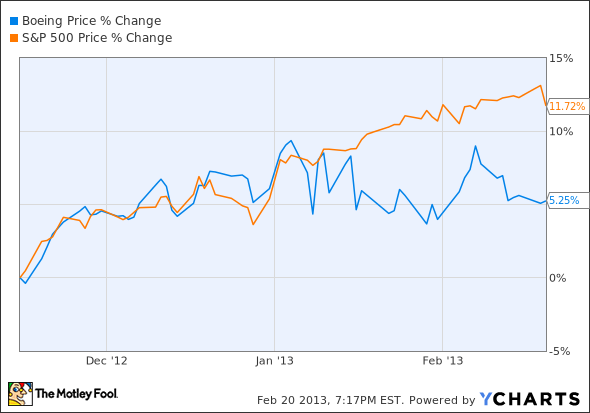 Note that the shares were keeping pace with the index until early January, when a Boeing 787 caught fire at Boston's Logan Airport. A second incident in Japan the following week convinced aviation regulators worldwide to ground the aircraft.

On a positive note, Reuters reported today that Ray Conner, the head of Boeing's commercial airplanes unit will meet with the head of the FAA on Friday to present engineering changes to the plane's lithium-ion batteries in a bid to get the Dreamliner back in the air. Also on Wednesday, the chairman of Air India said Boeing expects the planes to be flying again from early April.

Although I'm no expert when it comes to aircraft power systems or transportation regulation, I do know a fair amount about attitudes toward risk and the way they impact decision-making, in particular, in an institutional setting. As such, an early April reinstatement date looks optimistic to me.

The FAA has already been criticized for relying too heavily on Boeing in regard to the 787's initial safety certification program. Once bitten, twice shy -- regulators will not want to appear to be rubber-stamping the lifting of the flight ban. As Transportation Secretary Ray LaHood said on Jan. 18, "Those planes won't fly until we're 1,000% sure they are safe to fly." That's 10 times the necessary level of certainty, Mr. LaHood.

Boeing was repeatedly over-optimistic when it came to the delivery date of the 787; investors can expect further delays in the planes' (and the shares') current flight schedule.