Natural gas gathering and processing company Atlas Pipeline Partners (NYSE: APL) is out with its 2013 guidance. Not only did the company update the market on its growth plans for 2013, but it also hinted at what where its distributions will likely end up. Let's take a closer look at the importance of each for investors.

Atlas is planning to spend about $350 million over the next year on growth projects. That's a pretty big chunk of change for a company with a $2 billion market cap. That capital will be spent in building out its gathering infrastructure. Atlas also recently announced that it was accelerating the timing of the second half of its WestTx expansion into 2013. This is in addition to completing the first half of the expansion in the second quarter of this year. Visible and stable growth is what midstream investors look for and Atlas has both.

One key area of growth for Atlas is in the promising Mississippi Lime. Earlier this year the company signed a new percent-of-proceeds contract with SandRidge Energy (NYSE: SD) to compliment a fixed-fee gathering agreement. SandRidge is the largest producer in the play and is now almost solely focused on growing in the play. As it does, Atlas should continue to benefit from its early relationship with SandRidge as it likely will mean additional growth opportunities will flow its way.

All of this is part of a broad capital expansion and acquisition plan that's seen the company allocate $1.2 billion in capital over the past few years. More than half of that capital was spent to acquire Cardinal Midstream in a more than $600 million deal. The system, now renamed Akroma, is going to see additional capital headed its way to fund expansion opportunities. This capital is being spent for one purpose: to place assets into the service of Atlas investors in order to start generating revenue, which will increase the company's distributable cash flow.

Income distribution
Atlas is currently dishing out $0.58 a unit to its investors which equates to a near 7% distribution. Looking out over the past year you'll see that it has handed out $2.27 per unit which is a 16% increase from 2011. According to management, there's more on the way as its growth and acquisition capital starts bearing fruit. Atlas is forecasting that its 2013 distributions will come in between $2.50 and $2.60 per unit. That's a nice pay raise if you can get it.

The midstream MLP space seems to be a tale of two distributions, those that grow and those that don't. There are those MLP's like Enterprise Products Partners (NYSE:EPD) that have given investors a distribution raise each quarter. In fact, Enterprise investors have been given a pay raise for 34 consecutive quarters. Other operators, like Energy Transfer Partners (NYSE: ETP), haven't given investors a raise in 19 straight quarters. That's almost five years for those of you scoring at home.

Take a look at the following charts and you'll see what a rising distribution means for investors: 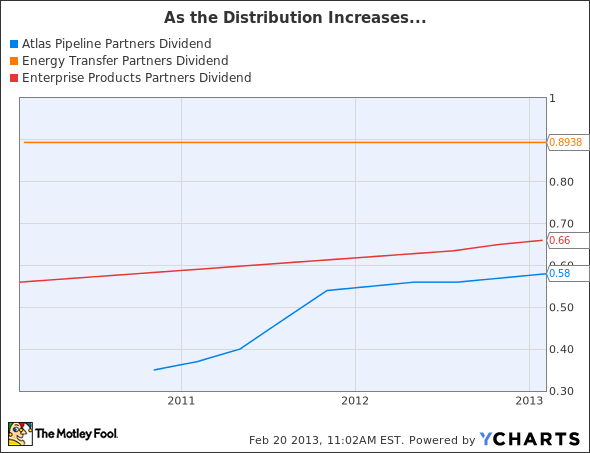 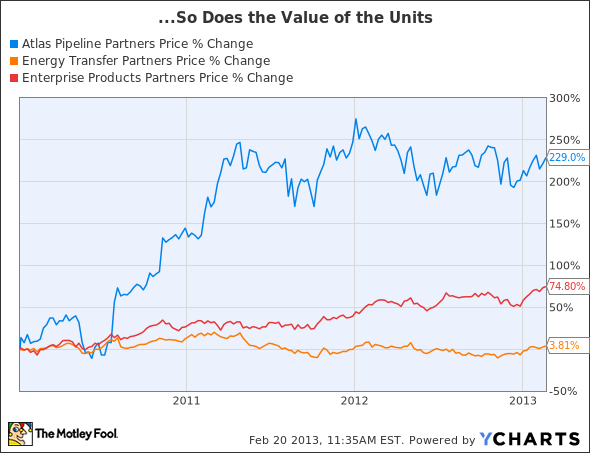 Atlas' growth has enabled the company to increase its payout, which has rewarded investors with both income and more valuable units. While the pace of that growth is slowing, it is still headed higher. That's a good thing for investors, as long as the company can keep it up.

My Foolish take
While Atlas has a very visible outlook for the next year, it doesn't have the backlog of long-term visibility of a company like Enterprise Products Partners. With more than $7 billion worth of projects in the pipeline, Enterprise still has years of growth ahead of it. Not only that, but it has a much more diversified revenue stream and base of operations. That's why my money's on Enterprise to keep the good times (and distribution checks) rolling.